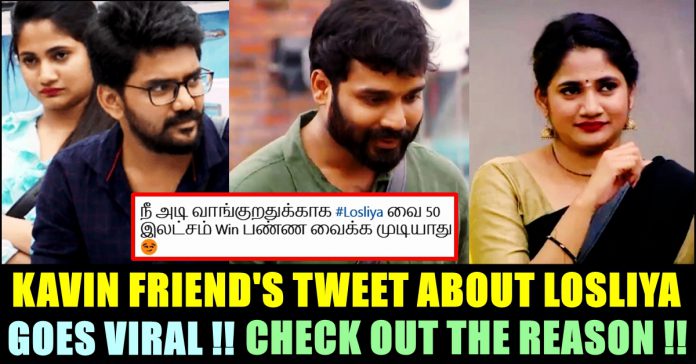 During the freeze task in Bigg Boss Tamil show, family members of every housemate entered the house to encourage their son/daughter/husband to win the game show. On behalf of Kavin, instead of his parents, Pradeep Antony, a long time friend of the “Natpunaa Ennanu Theryuma” actor entered the house.

More than pouring love, Kavin’s friend criticized him the most and at one point he gave him a tight slap for not playing the game properly and for hurting others. He even asked Kavin to slap him back only after winning the Bigg Boss title.

Things took twist and the actor now is out of Bigg Boss house after accepting the 5 lakhs which was offered by Bigg Boss. He volunteered himself and got eliminated with a cheque of 5 lakhs. Though the housemates compelled Kavin to stay inside the house for 3 more days till weekend, Kavin adamantly went out of the house without considering the tears shed by Losliya and Sandy.

However, Pradeep Antony who was already popular among few cinema fans for his appearance in the critically acclaimed 2017 movie Aruvi as a supporting actor, made much impact during his entry in Bigg Boss. He did a role of “PETER” in the movie “Aruvi” who is an assistant director of a reality show “Solvathellam Sathyam”.

Now, in his recent tweet, Pradeep took an U turn and said that he would get the slap from Losliya if she wins the show. “Social experiment: Would you all make losliya win, if I’m willing to take a slap from her on behalf of kavi?” he wrote in his tweet.

Social experiment:
Would you all make losliya win, if I'm willing to take a slap from her on behalf of kavi?#KudumbathukullayaeKasuIrundhaCommissionKekalamLa #SuyanalamKarudhi #ImAnAgentOfChaosToo #ILikePlayingStrategyGames

Check out some of the reactions he is receiving for his tweet :

Social experiment:
People will consider voting for Los if you go inside this week and slap her twice for what she did to Sakshi and for friendzoning Kavin after all this. Sympathy la votes thaana vizhum! Like it happened for kavin. Seiveergala?#BiggBossTamil #BiggBossTamil3

she is worthless…..dont loose the respect we have for u