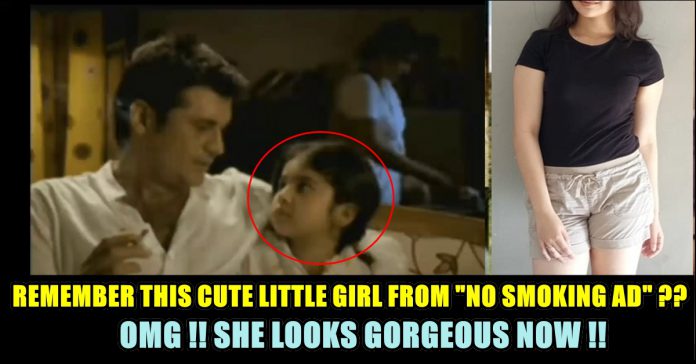 No matter whatever the movie you might go for, there’s a smoking advertisement that will be played before the movie. And one cannot simply forget that cute little girl who shrinks her face after looking at her dad smoking, then smiling abroad her little cheeks after her father threw off the cigarette.

She is now 19-year-old and her real name is Simran Natekar. She belongs to Mumbai and started her screen career as a child artist in 2002. Since then, there’s no looking back. Simran went busily for the following years advertising prominent companies and food manufacturers. Simran was eight at the time of the government advertisement and since then, she has gone on to act in nearly 150 ads. “When I was 8 years old, I did my first ad with a social message about dangers of smoking. At that time, I hadn’t planned on becoming an actress, it was not my dream. But, later, after I did a couple of TV shows and films, I grew  hungry for more and I wanted to be a part of the cinema world.” says the actress when she got an opportunity to work in an Kannada film.

Dominos Pizza, Kellogs Cornflakes, Yakult Milk drink, Videocon electronic products, Clinic Plus shampoo, Barbie toys, and a lot more comes under the list of companies she worked for. She also played the role of Shahana. She has just completed her Class IX exams and will be appearing for her X next year, even while she has her Bollywood dreams. She says, “Priyanka Chopra is my idol. She has made us proud by getting into Bollywood and now into Hollywood. I want to follow her style of work.  It’s just not about acting because I want to do well in my academics too.”

Check out some of the recent pictures of Simran Natekar : Time flies! yes! From a cute little girl in an advertisement toa beautiful actress, she did it well so far. What do you think comment below !!

While it’s not unusal for brands to engage with users on social media, it’s rare for a brand to take a dig at them....

As the whole country is suffering due to the threat made by the deadly virus Coronavirus, both state and central government proposed public...