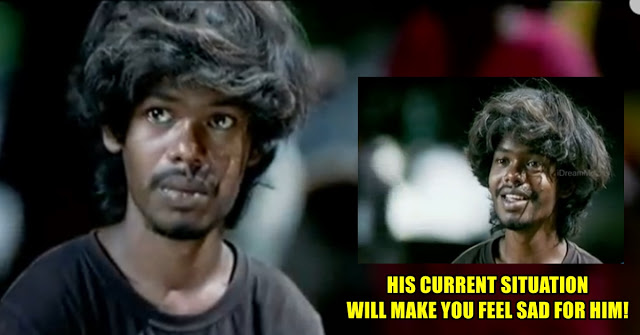 Remember Theepetti Ganesan From Renigunta & Billa-2 Movies? This Is What He Is Doing Currently For His Living!

However it has been years since he was seen acting in films. While he has almost faded out from everoyone’s memory, he has been spotted in a hotel at K.K.Nagar, Chennai. He has been working as a supplier in that hotel run by poet Jeymakondan.
Here is the sad story that lead Ganesan to bury his acting dreams and take up some other work, in his own words.
“I hail from a middle class family in Madurai. I discontinued studies after completing ninth standard and was working as a painter. I came across about the casting call for the  ‘Renigunta’ through a local news channel and took part in the audition. I was luckily selected. It was Pannerselvam, the director of ‘Renigunta’ who added the prefix ‘Theepetti’ to my given name Ganesan. After ‘Renigunta’ I was regularly getting opportunity to act in big banner films with stars and everything was going fine until my Manager’s greed played the spoiltsport.
My Manager demanded exorbitant salary from film producers without my knowledge and he even swindled the money received in the name of salary for me. This made film producers stay away from me and I started losing opportunities to act in films. As I don’t have any other job, I am working in this hotel now. I am willing to act in films. I never demand a high salary. I am always eager to act and receive the pay given by the producer.  My aim is to act in as many films as possible, earn good name and stabilise my position in the film industry. I request film producers and directors who wish to cast me in their films to approach me directly and not believe anyone claiming to be my manager.”
In the history of Kollywood, hundreds of such young talents have lost their career due to such malpractices by others and lack of proper communication channels. We wish Theepetti Ganesan is rescued from a similar fate and that’s why we deem it necessary to publish his story in IndiaGlitz. We hope the film producers and directors reading this will give him an opportunity and pave way for his reentry in Tamil films.
Source – Indiaglitz
Previous articleADMK MP Slaps DMK MP.. And The Consequences She Faced From ADMK For Slapping Him Is Shocking!
Next articleHere’s How You Can Make “Emergency Calls” Even When There’s No Network Coverage.!!