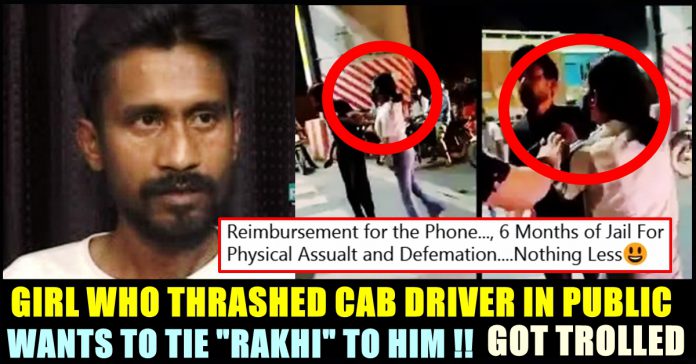 A girl named Priya dharshini who rose to fame across the country after slapping a cab driver for no appropriate reason, sought peace with him by trying to tie knot for him on the special occasion of “Rakhsa Bandhan”. Her gesture caused various kind of reactions in social media platforms with many questioning whether it would be accepted by the society if a male did the same against a female.

Weeks ago, a hashtag saying “Arrest Lucknow Girl” trended in the micro blogging social media site with several tweets demanding arrest against a girl who was caught beating a cab driver in public. The incident took place at Awadh crossing that is located in Lucknow. The incident created debate among the online users on whether the girl should be punished for what she did or not.

In the video, the girl could be seen slapping the cab driver multiple times and also breaks his phone. She also attacks the man who comes in to defend the driver. She claimed that the car of the driver had hit her and cited it for thrashing him. The viral video had sparked huge outrage among the public with people questioning the girl’s behaviour.

However, the CCTV footage had suggested a different story as the girl could be seen trying to cross the road while the road is busy. When the cab driver stopped his car on seeing her on his way, she could be seen instigating the dramatic situation. She reportedly broke his car mirrors. The cab driver could be heard seeking help from public and says that the woman broke his phone.

When the public intervened to calm the situation, she started beating one of them too. A recent report suggested that an FIR has been registered by UP Police under sections 394, 427 at Krishna Nagar Police Station. Watch the Video below :

While the users of Internet expressing their displeasure over the girl’s behaviour, she decided to make peace with the cab driver by trying to tie the thread which is meant for Raksha Bandhan. She who identifies herself as Priyadharshini, took the initiative of tying Rakhi to the victim named Saadat Ali to settle the quarrel between them.

She said that if Saadat comes home, she will welcome him and start a new relationship by tying him the protective thread. As soon as the report surfaced, reactions are pouring from all the directions of Internet. Report suggests that the cab driver hasn’t reacted to her gesture.

“So, the Lucknow girl Priyadarshini used the auspicious Rakshabandhan ceremony, as a cover, by bringing sweets and rakhi to the cab driver, to stop this whole controversy. Nice way to tackle your problems, but it was unexpected” a social media user wrote whereas another one said “She is doing this to escape from further controversies, and nothing else.”

She is doing this to escape from further controversies, and nothing else.

So, the Lucknow girl Priyadarshini used the auspicious Rakshabandhan ceremony, as a cover, by bringing sweets and rakhi to the cab driver, to stop this whole controversy.

Nice way to tackle your problems, but it was unexpected 🙄.

No, he shouldn't accept this, she must get punished for what she did.

Reimbursement for the Phone…, 6 Months of Jail For Physical Assualt and Defemation….Nothing Less😃

Let him slap her 22 times and end the episode at win-win place… https://t.co/xX0TuEbXv6

Previous articlePETA Wants Cow’s Milk To Be Used Only To Feed Calves
Next articleBenny Dayal Replied To A Follower Who Spewed Hatred At Him On His “Onam” Post !!

As soon as the news on Mariyanesan's demise surfaced, fans posting condolence message to Losliya asking her to be strong. Followed by national award...

The main crew of popular spoof comedy show "Lollu Sabha" has revealed that actor Vijay and his father SA Chandrasekar searched for them for...