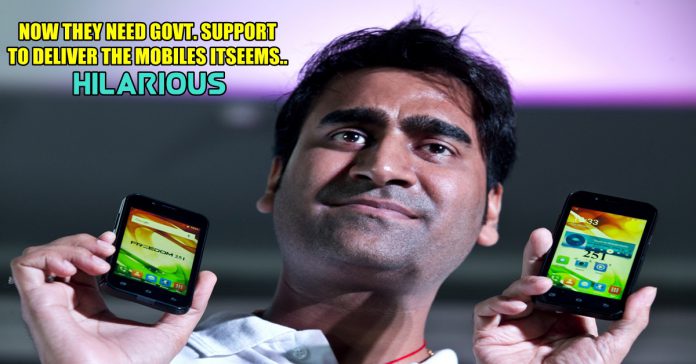 Remember Freedom 251 ? They Have Now Come up With A New Fake Promise & Wants Govt. Support

Remember the Freedom 251 phone? This smartphone was supposed to completely change the scenario of mobile phones market; however, nothing happened as Mohit Goel, whose mind was behind it, was arrested last year because he didn’t deliver the phones on time. Mohit was sent to jail for six months and he is out now. He firmly believes that he can still fulfill his promise by March-April, provided that he gets support from the Indian government.

He earlier failed to deliver phones and now once again, he is trying to play with the emotions of people, giving them a hope which is not going to get fulfilled most probably. Mohit criticised the government for not helping him despite the fact that he started this project under ‘Make in India’ and ‘Start-up India’ initiatives of Indian government. He wants to deliver handsets to the customers who have booked it but he needs help from the government. He also revealed as to why his company, Ringing Bells Pvt. Ltd., was not able to fulfill the promise made to customers.

Mohit, MD of Noida-based Company, stated that his company was cheated by two people whom he paid nearly Rs. 3.5 crore for providing handsets but they didn’t deliver. He told IANS in a telephonic conversation,

“I paid the duo nearly Rs 3.5 crore and, in return, they cheated me. They siphoned off the money and did not deliver any phone. In February this year, some distributors filed a case against me and I was jailed for six months. Now with the fresh arrests, people will come to know why I failed to deliver on my promise.”

On Sunday, police arrested Vikas Sharma (35) and Jeetu, (40) and sent them to Dasna jail on the basis of FIR field by Mohit Goel.

Mohit was taken into custody by the police when a Ghaziabad-based distributor Ayam Enterprises filed an FIR against him for committing a fraud of Rs. 16 lakh. Later Mohit was granted bail by the Allahabad HC. However, it is being said that both the parties have settled the matter outside the court.

After getting released, there is only one thing on Mohit’s mind and that is Freedom 251. He told IANS,

“My vendors didn’t deliver on time and I failed. Our company’s President Ashok Chadda is still languishing in jail. I need one opportunity to come back clean and provide people handsets by March-April next year.”

He went on to say,

“The big players today have adopted my model and are now giving smartphones in as low as Rs 1,300, like Karbonn. The Jio model for paying Rs 1,500 in advance for a smartphone is similar. They have deep pockets so they can afford but why don’t people ask them how they are making smartphones so cheap?”

Nearly 70 million booked their mobiles before the website crashed and as per Ringing Bells, it had already delivered 5,000 “Freedom 251” smartphones last year in July. Now it will work on delivering 65,000 smartphones to all those who have chosen the COD (cash on delivery) mode while delivering.

Well, Mohit Goel is back with his excuses and demands for government support and we are sure that nothing is going to happen this time as well.

How many of you think that he will actually deliver smartphones? Do let us know.

“I Was About To Knock Bigg Boss House At That Night” Nithya Opens On Aishwarya’s Activity Against Balaji !!