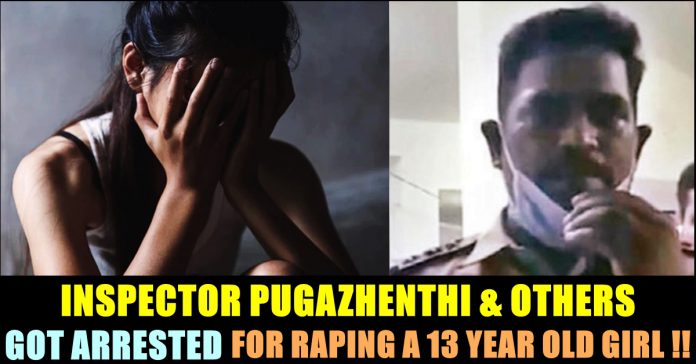 C. Pugazhenthi, a Police inspector at Ennore, Chennai got arrested on Monday for sexually assaulting a 13 year old minor girl. He was booked under the Protection of Children from Sexual Offences Act and is currently in the jail. The Inspector was arrested after a woman who was arrested earlier for forcing the victim into prostitution confessed the crimes he committed against the girl. The incident came to light after the girl confessed about the trauma she went through to her mother.

Shahitha Banu is a cousin for the victim as she is a daughter of the victim’s mother’s elder sister. Citing health issues, Shahitha requested the mother to send her daughter for help. The victim went to Shahitha’s house with her mother’s permission.

To the mother’s shock, even after two long months, Shahitha didn’t send the girl back to her mother. Sahitha’s husband Madhan kumar denied to send the girl back as a result of which the mother fought with them and brought her daughter back. After bringing her home, the mother found something strange with the activities of her daughter. When she asked her daughter about what happened in the 2 months, the victim revealed that she was forced to do sex work by Shahitha and her husband. “She was raped at least eight times a day” said an official who investigated the case, according to Hindu.

The police officers of All women’s police station in Washermanpet started their investigation based on the complaint registered by the mother. Madhan kumar, his wife Shahitha Banu, his mother A Selvi, Sandhya, Maheshwari, Vanitha, Vijay and Karthik were arrested by the Police for forcing the girl into the flesh trade.

Sandhya, sister of Madhan kumar told Police that she had sent the girl to a man named as Rajendran who is their customer. In the investigation, Police found that the girl was raped by the police inspector Pugazhenthi in Rajendran’s office. It has been reported that Rajendran belongs to BJP party. After the girl identified them, Police arrested Rajendran and Police officer Pugazhenthi under POCSO act. It was also reported that the girl was raped by Madhan kumar before being forced to do sex work.

Pugazhenthi who got suspended by the Chennai Police, was sent to Puzhal prison after he was remanded to judicial custody. In the investigation, Rajendran revealed that Pugazhenthi had chosen to sexually assault the minor girl in exchange for not reporting the crime. An investigation is underway and a special team has been assigned.

Reports suggests that the investigation team is also considering the several other complaints against Pugazhenthi such as bribery, holding kangaroo court inside police station etc. An official who involved in arresting Pugazhenthi said that it sends out a strong message to the public. “POlice stands for what is justice and will not spare anyone if he/she is culpable” he said.

Imman’s Ex Wife Trolled Him Based On His Remarriage Post!!

Music composer D. Imman's former wife Monicka Richard who questioned him for finding a replacement this soon after his remarriage, trolled him based on...