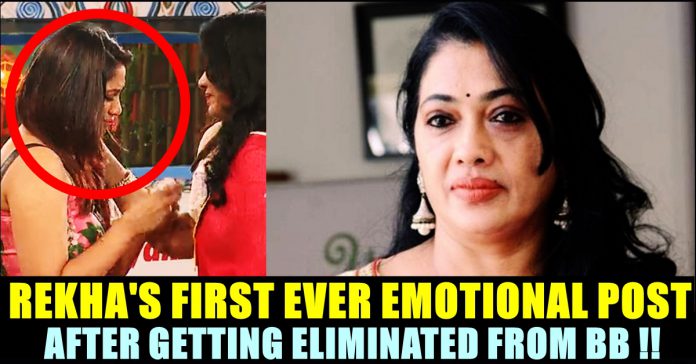 Veteran actress Rekha became the first participant to get eliminated from the season four of Bigg Boss show which is being hosted by Ulaganayagan Kamal Haasan. Between Sanam shetty and Rekha, followers of the reality game show decided to eliminate Rekha by casting her the less number of votes. While getting eliminated, Rekha said that she doesn’t entered the show to achieve milestones. “I came in to experiment myself. It was fun. Unlike people’s assumption, this show is not a scripted one. It’s people’s behaviour that changes time to time” she said in her speech before leaving the set.

Actress Rekha who acted with Kamal Haasan in “Punnagai Mannan”, made her entrance with all smiles and received the warm welcome of Kamal Haasan. Inside the house, Rekha had a good bonding with almost all the contestants. Balaji Murugadoss and Shivani left dejected on hearing about her eviction.

Rekha gave her lucky coin to Shivani Narayanan with whom she had an emotional bonding during her time inside the house. Now, after getting eliminated from the show, Rekha came up with a number of social media posts, expressing her love towards the co-contestants of Bigg Boss show.

Posting a collage picture of her daughter and Shivani Narayanan, Rekha said that she is missing both of them. Adding the song “Kannana Kanne” from Viswasam movie in the background, Rekha wrote “Missing badly both😭😭😭😭😭😭😭❣️💞💕💘❣️🥰✌️” in the post.

She also added another post of Bala and Shivani crying for her elimination and wrote “Love you both and missing you badly my challakuttuies….. ummmmmma”

Love you both and missing you badly my challakuttuies…..ummmmmma

She also added another post expressing her emotions towards Shivani.

Rekha, as a 26 year old debuted in Tamil movie Kadalora Kavithaigal directed by Bharathiraja with Sathyaraj in the lead role. Her notable works include Punnagai Mannan, Enga Ooru Pattukaran, En Bommukutty Ammavukku and Kadalora Kavithaigal in Tamil and, Ramji Rao Speaking, and Aey Auto in Malayalam. She was born in Kerala and completed her studies at Ooty in Tamil Nadu. She now works in TV, mostly in serials, and does occasional supporting roles in films.

Previous articleDhoni’s Reason For Not Bringing Bravo In The Last Over Didn’t Convince Fans !!
Next articleWhy Nayanthara Never Acted In Director Hari’s Movie After “Ayyaa” ??