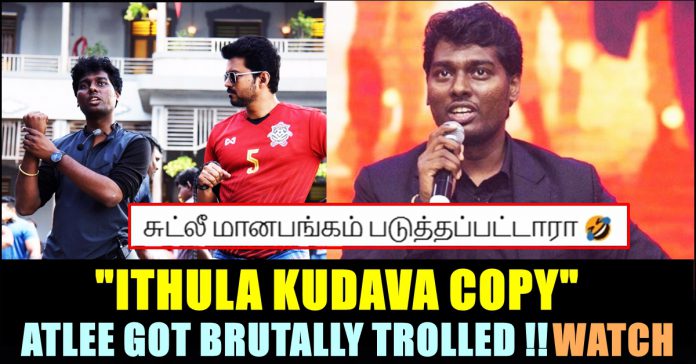 A recent promo video from Vijay Television for their reality comedy show roasted filmmaker Atlee in big time. Vijay television is very well known for the reality shows it is streaming. From Jodi Number One, Kalakka Povathu Yaaru to Bigg Boss Tamil, the channel always surprised its audience and is being considered by fans as a pioneer for its competitors. Many of its shows were ripped off by other channels with different names about which the Tamil TV audience are very much aware. The comedy show “Kalakka povathu Yaaru” is popular among the TV audience and the show intends on finding new talents to perform humours in order to present them a large sum of amount as prize award at the end of the show.

In a never seen before category, a recent promo shows us a couple of new contenders trolling Atlee who is one of the leading filmmakers of Tamil film industry now. The surprising fact about the promo is a guy attempting the voice of the filmmaker himself which is something we haven’t witnessed before.

In the video we can see them imitating the Bigil audio launch speech of Atlee where he said that his film is going to be the best of his career. Watch the promo here :

Atlee is arguably one of the most loved and hated filmmaker of Tamil cinema right now. Being a former assistant of Shankar, Atlee’s way of presenting his films and the castings he choose for the characters are considered as his major qualities. Atlee is often criticized for replicating the movies of ace filmmaker Manirathnam.

As soon as the promo released, people started reacting in a way of trolling the filmmaker. Many mentioned the original twitter account of Atlee to make him watch the promo. Check out some of their reactions below :

What do you think on these reactions received by the promo ?? Comment your views below !!

Previous articleActress Complained Against Adult Meme Page & Got Disappointed !!
Next articleGirl Called Ratan Tata As “Kid” !! Here’s How He Treated Her !!