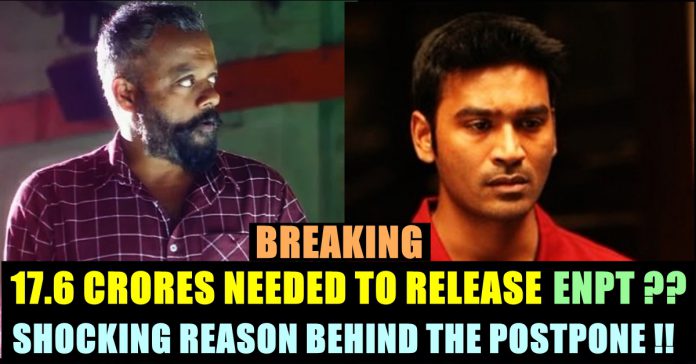 Danush starrer Enai Noki Paayum Thota (ENPT) is ready to see the light of day but getting its last delay it seems. The Dhanush-Mega Akash starrer which has been in cold storage for almost two years has finally gotten a confirmed release date only to be postponed again.

However, the film is expected to be released on coming Saturday. According to the news minute report, the film’s delay is due to the financial crisis. The film is supposed to be released by Lyca Productions and K productions. A production house called as Arka Media Works which produced Bahubali series filed complaint against SN Rajarajan of K productions who distributed Bahubali in Tamilnadu. Reportedly he failed to pay the due to Arka Media works during the Bahubali release time which made them to make a complaint now. Court ordered K productions to pay 17.6 crores in order to lift the ban.

Vijay Sethupathi’s “Sindhubath” was also faced similar trouble as it was produced by SN Rajarajan of K productions. However the movie got released after mutual agreement between both the parties. Now, it seems Arka Media works stopped ENPT with the help of court in order to get their pay.

The recent reports also suggested that Gautham Menon is off to London to get the advance amount from Lyca Productions for the upcoming movie he is going to do with Surya in order to sort out the current issue of ENPT. But it is unknown how far the news is authentic.

Now after hearing this news, fans of Danush and Gautham Vasudev Menon who got dejected, roasting the makers of it in social media platforms. Check out some of their reactions here :

If they can't handle? Then why they tell the release date of the movie ? And movie bookings in Mumbai & Bangalore.? Are they playing with fans ? Emotions??

He is trying his very best for all the financial crisis he is facing right now with his films delay!

When do you think the movie will get released ??Comment your views below !!

This Top CSK Player Failed In YO-YO Fitness Test & Missed To Make It To The Indian Team !! : Disappointing !!

Indian team’s next task is to travel to Ireland for the two-match T20I series, scheduled on June 27 and 29. The squad for the...