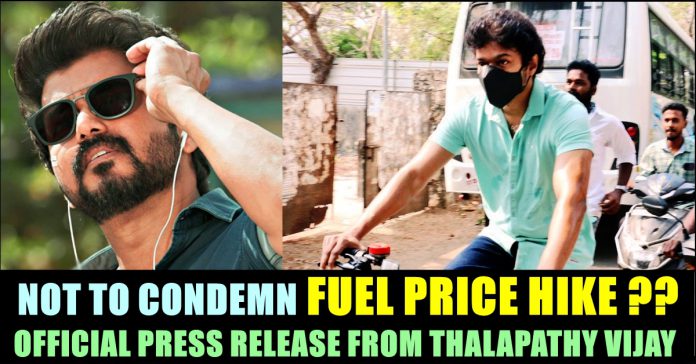 Riaz K Ahmed, PR of actor Vijay released an official note addressing why actor Vijay chose to reach the polling station in cycle. The tweet he posted said that the polling station was right next to his residence and the actor decided to go in cycle due to the narrow road which doesn’t have ample space for a car to travel or to park.

No hidden agenda behind the cycle.

Since the morning, videos and pictures of the actor Vijay riding bicycle to the police station to cast his vote was doing rounds. Many people believe that the actor took an indirect dig at the central government’s petrol price hike whereas others say that he drove cycle to create awareness against the air pollution. However, along with millions of fans, enormous number of celebrities are celebrating the actor’s gesture. Criticisms for causing traffic and mass gathering are also surfacing in the online medium.

However, an official press release from the Public relation manager Riaz K Ahmed has said that the actor decided to travel in cycle only to reduce the traffic the area. “Thalapathy Vijay decided to go by cycle instead of using the car because the poll booth was right next to his residence and taking the car might have congested the road even more. There was no other intention behind it!” read the official note of Riaz.

On the work front, actor Vijay is all set to appear in a film which is going to be directed by Nelson Dilipkumar which is tentatively titled as “Thalapathy 65”. The film’s Pooja event took place recently and it was announced that Pooja Hegde is going to pair with Thalapathy. On the biggest day of Tamil nadu politics, some of the most prominent celebrated personalities of Tamil film industry have come forward to cast their votes at the early hours. Tamil actors Ajith kumar and Vijay have casted their respective votes and inspired their millions of fans big time.