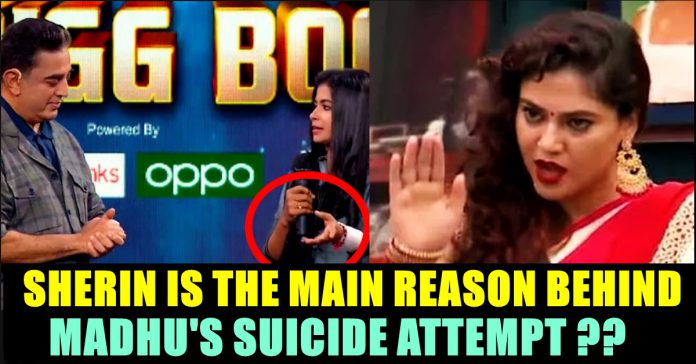 Bigg Boss Madhumitha was terminated from the Bigg Boss house due to breaking the rules of Bigg Boss show. It is the second time in the same season, a contestant getting terminated for behaving beyond control. Madhumitha’s was considered as one of the contestant to win the title.

While terminating her, Bigg Boss said that during an argument between Madhumitha and the housemates after a task, the OK OK actress hurted herself to prove a point she stated. Now, the actual reason behind the termination has been revealed.

While the hello app slogan task, the slogans of every participants has been telecasted except Madhumitha and Tharshan’s. According to reports, Madhumitha during her slogan task has talked about Cauvery river issue between Tamilnadu and Karnataka.

While talking to Cheran about the swimming pool being empty as a sign of water scarcity in Tamilnadu, Madhumitha reportedly said “Varuna Bhagavan kooda Karnataka Kaarar Pola Thanner Tharamal Vanjikiraar” (Even Varuna Bhagavan is cursing Tamilnadu like Karnataka people by not providing water).

This statement from Madhumitha irked Sherin who immediately confronted her for talking ill about her state. Kavin, Mugen, Sandy, Losliya, Tharshan who were already involved in argument with Madhumitha started opposing her statement it seems. Even few contestants told Bigg Boss that they would evict themselves from the house if Madhumitha stayed. At one point, to prove that her care for Tamilnadu state is true to them , Madhumitha hurted her wrist with a sharp tool. It seems no one in the house except Cheran and Kasthuri paid attention to what Madhumitha did which is evident through the conversation between Kamal Haasan and Kasthuri is yesterday’s episode.

Even during interacting with Kamal Haasan, Madhumitha stood with her decision and argued with the host himself. However, Kamal Haasan, sent her by wishing her all the success in the future. “I don’t know whether they(Television) would telecast it or not. But I did it for what I uttered to them.” said Madhumitha.

The news spread like a wildfire across the Internet. Check how netizens are reacting :

If madhu paithiyam was so concerned about Cauvery issue,
She should have spoken first week itself. Why she‘d to wait until she lost some stupid arguments. She knows how to manipulate Tamil ppl mind with Tamilponnu/culture / Cauvery/ penadimai#BiggBossTamil3 #BiggBossTamil 🤮

It is NOT Cauvery talk that led Madhu to extreme. BiggBoss stopped it.

2nd -yelled at sandy,made issue out of nothing & make herself victimized

3rd -she brought Abi issue for her own gain

So #Madhu is out from home after hurting herself is due to her fight wit #Sherin ! She has spoken about #Karnataka Cauvery issue on Hello app contest sterday & tat caused d fight ! Vaaya vachukuttu summavey irukkadhu pola idhu 🤷‍♂#Biggbosstamil3

This shows, Even Other House Mates Didnt Want To Talk To Madhu 😌 If its a suicide attempt they would have really felt Bad… This is More like A STUPIDITY.. Thats why even cheran sir didnt bother much 😌🙌 Haters.. Its hight time use ur brain #BiggBossTamil3 #BiggBossTamil pic.twitter.com/nCHQSymTN0

What do you think on this behaviour of Madhumitha ?? Comment your views below !!

Previous articleAfter Madhumitha’s Incident, Is There Eviction On Bigg Boss For This Week !! Check Out !!
Next articleVishnu Directly Slammed This Award Function For Not Considering “RATCHASAN” !!

20 Year Old Babisha Got Married To Ajin Whom She Met In PUB G Game !!

A first year college student who discontinued her studies, got married to a youth whom she met in PUB G game. On September 2,...