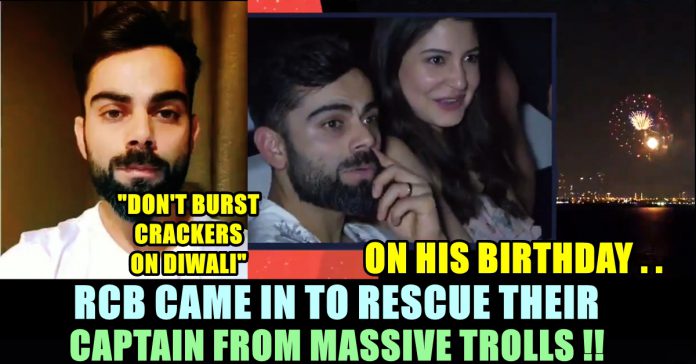 After fans accused Virat Kohli of being a hypocrite for asking people not to burst crackers on Diwali by uploading a video of crackers bursting on his birthday, the official twitter handle of team Royal Challengers Bangalore came up with a clarification. It was a birthday celebration arranged by the team management of RCB on the 5th of November which made them to clear the air now.

Kohli who is currently staying in Australia with the rest of the Indian squad, posted a video message in his official twitter account on the special Diwali day. In the video, Kohli asked his fans and followers to avoid bursting crackers on the festival of lights to protect the environment and reduce pollution.

His message didn’t go well with many of the social media users who confronted the cricketer for trying to break the ritual and for ruining people’s enjoyment. Few fans went one step ahead and posted the video that shows crackers being bursts during Kohli’s birthday celebrations with his RCB teammates in Dubai earlier this month. Kohli was seen accompanying by his wife Anushka Sharma for the celebrations.

In the video shared by RCB’s twitter handle, crackers can be seen bursting in the background right before Kohli and Anushka cute cake together. The video has been widely shared in twitter terming Kohli as “hypocrite” for not practising what he has been preaching. Some also pointed out how crackers have always been part of IPL and other cricket tournaments where they are used extensively after a final.

Mr. @imVkohli we are your fan …fan of your game fan for your contribution for the nation….but please please don't be hypocrite and don't preach us ……on Cramer bursting or on our any holy festivals….mind it…🙏🙏🙏🙏 https://t.co/EFKZiZrj4U

Namaste, virat “hypocrite “ Kohli 🙏 we don’t need you to preach about what has to be and what not to be done this deepavali. Stop being a woke n be a man. Not just somebody’s husband https://t.co/WOX4JghosG

This Guy just had Firecracker full of IPL Final.

He is telling us how to celebrate, did he tell the same to BCCI or IPL organisers? https://t.co/ZciPl6lK0j

HYPOCRISY at it's best
HYPOCRITES and OPPORTUNISTS of India 1.FAKE BOLLYWOOD 2. CRICKET they are working on
FAKE NATIONALIST agendasThe MOST RUBBISH Industry of India after DRUGGYWOOD, GUTTER WOOD BULLYWOOD, BOLLYDAWOODS is CRICKET @imVkohli @AnushkaSharma #YehDiwaliSushantWali https://t.co/ApVvQHuGct

it is the tradition to burst fire crackers after winning the trophy in IPL. To save the environment he hasn't won the IPL trophy yet. Truly a legend 🙏 https://t.co/3PRvhep2mt

Now, RCB has came in to rescue their captain from the trolls. They clarified that the footage consisted on the celebratory video was from archival footage of UAE’s Flag day celebrations. “Hope you are all enjoying a happy and peaceful Diwali with family and friends.Diya lamp To clarify, the fireworks shown in RCB’s recent celebratory video was archival footage of UAE’s Flag Day celebrations. RCB continues to work hard to protect the environment like we’ve over the years.” their tweet read.

Hope you are all enjoying a happy and peaceful Diwali with family and friends.🪔 To clarify, the fireworks shown in RCB’s recent celebratory video was archival footage of UAE's Flag Day celebrations. RCB continues to work hard to protect the environment like we’ve over the years.

India's first attempt to land on the Moon may have gone off-script but the ambitious Chandrayaan 2 mission has been far from a flop....