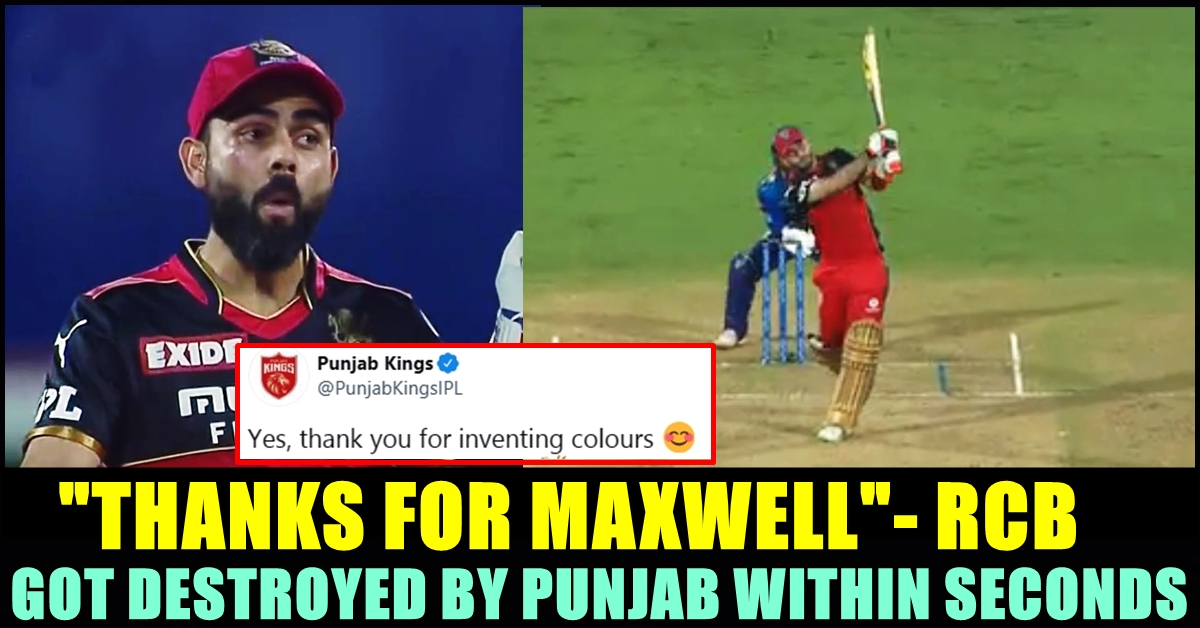 Online banter between the official social media handles of the IPL teams has started way before the inauguration match of the fourteenth edition of the cash rich league. Now, as soon as the first match saw its result, teams have rolled up their sleeves and started engaging fans by involving in trolling each other. The recent victim of online troll is team RCB who registered their first win in the tournament against Mumbai Indians.

In the batting innings of Royal Challengers Bangalore who chased 159 runs, Glenn Maxwell scored 39 runs with a strike rate of 139. Team Australia’s batting all rounder Glenn Maxwell was sold to Royal Challengers Bangalore for Rs. 14.25 crore in the mini IPL auction that took place in Chennai on 18th of February. The cricketer who played for Kings 11 Punjab in the 13th edition of Indian Premier League was bought by the Kohli led team to fill the spot of a finisher.

In the innings, Maxwell who failed to clear a maximum in the last season, smashed two huge sixes in his first innings for Royal Challengers Bangalore. One of the sixes went for 100 metres and out of the ground after bouncing off the roof of the MA Chidambaram Stadium in Chennai. Meanwhile, RCB skipper Virat Kohli, the non-striker at the time, was astonished at the strike and his reaction was priceless.

Watch the six below :

Ohh yes maxi!! That’s a biggie! He hit a six in IPL more than 1079 days ago!😂😂 things are getting better for him❤️#ipl #RCBvMI #Maxwell pic.twitter.com/Ae30a3X7rC

As soon as Maxwell cleared the maximum off Krunal Pandya, Royal Challengers Bangalore came up with a tweet thanking Punjab for releasing Maxwell from their team. “First Maxi-mum in Red and Gold and he nearly hits it out of Chennai! Thank you Punjab. We would hug you if not for social distancing” their tweet read.

First Maxi-mum in Red and Gold and he nearly hits it out of Chennai!🤯

This tweet from RCB garnered wide reach in no time but what made the fans of IPL to laugh out loud is the reply of Punjab. They mentioned the names of the players who they bought from RCB and thanked back the Kohli led team. “Aww and thank you for Gayle, KL, Mandy, Sarfaraz, Mayank… “

RCB tried to troll back Punjab by pointing out the similarities between the new jersey of Punjab and one of the old jerseys of themselves. “You missed jersey, helmet, pads…and logo? “But between us, who’s keeping count?” RCB said but Punjab kept coming back. “Yes, thank you for inventing colours And congrats on the win” Punjab mocked back.

Yes, thank you for inventing colours 😊
And congrats on the win 👏🏻#SaddaPunjab #PunjabKings #IPL2021 #MIvRCB

This conversation between the two teams caused hilarious reactions among the fans. “Punjab admin destroyed rcb admin with class” said a fan whereas another one stated the head to head record “Head to head punjab 14 rcb 12 “