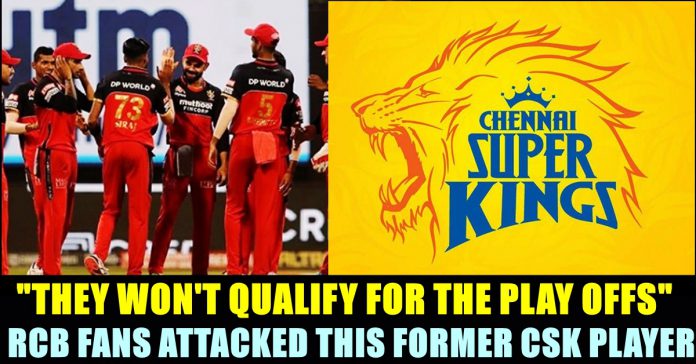 For not adding RCB in his predicted Playoffs list, fans of team RCB attacked Scott Styris, former CSK player. In the tweet posted on 14th of September, Styris said that Delhi Capitals, Mumbai Indians, Kolkata Knight riders and Chennai Super kings will be the four teams qualifying for the play offs. He added Sunrisers and Royal Challengers in the fifth and sixth spot. Punjab and Rajasthan Royals grabbed the seventh and eighth spot in his list.

The Way too early @IPL power rankings for 2020

Now, team RCB has reached the second spot with 14 points in just 10 matches. The team needs just one win from four matches to qualify for the play offs. On Wednesday, they restricted Kolkata Knight riders within 84 runs and chased it in the 14th over to increase their net run rate.

After the victory, fans of RCB started criticizing the prediction of Scott Styris who firmly believed that RCB won’t qualify for the play offs. Check out some of their reactions below :

Ridiculous and blindfolded analysis.
Almost #CSK knockout confirmed and #RCB s playoffs confirmed. From which data's u analysed,from the past years history?
🤣🤣🤣🤣🤣

Scott Styris is a former New Zealand all rounder, who played all formats of the game. Being an allrounder, Styris played as an aggressive right-handed middle order batsman and a right-arm medium pace bowler. In the IPL tournament, he played for Deccan Chargers and Chennai Super Kings between 2008 and 2011.

On Wednesday night, Siraj’s terrific seam bowling stumbled down the KKR’s top order line up. He became the first bowler in T20 history to bowl 2 maiden overs in a single match. In the 4 overs, Siraj gave just 8 runs and picked 3 main wickets of KKR. Captain Kohli heaped all praise to Siraj in the post match presentation.

Actress Samyukta Hegde, a Bangalore based actress who is known among Tamil cinema audience for appearing in a recent blockbuster "Comali" attacked by public...