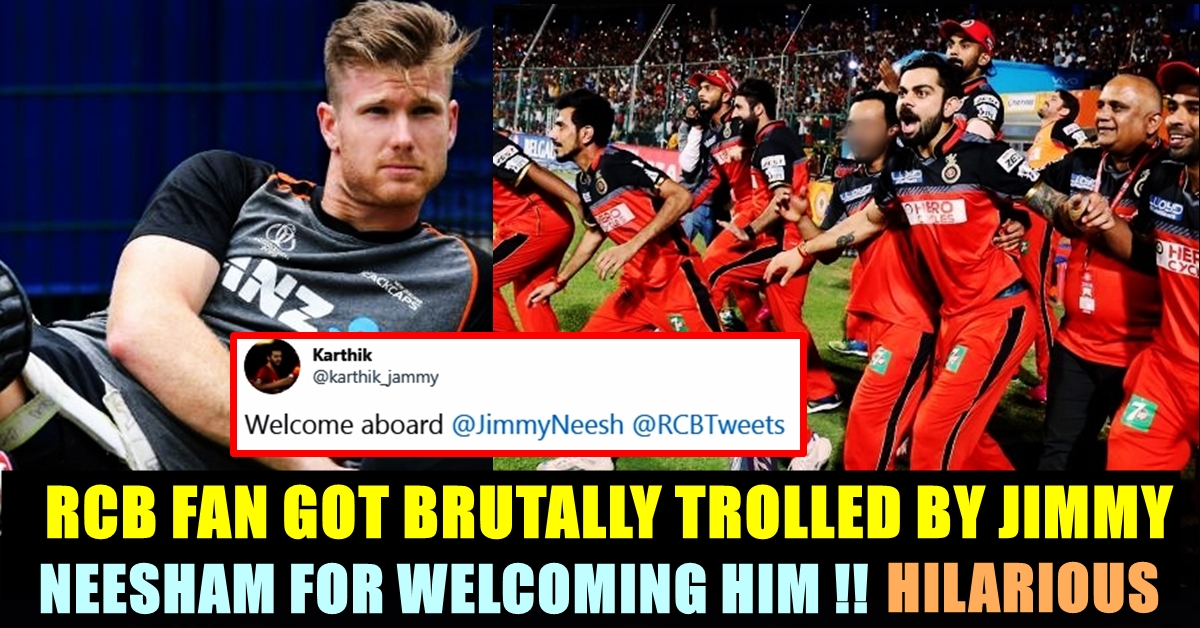 The IPL edition for the year 2020 is already grabbing the headlines as teams have released number of players from its franchise. Team Royal Challengers Bangalore is one of the very few teams which haven’t won a tournament so far despite of having Virat Kohli as its captain. Fans of the team are very much eager this year for their team to lift the cup for the first time in history which is evident through their social media activity.

Jimmy Neesham, one of a prominent player of New Zealand team has replied to one of a fan of RCB team who thought that Neesham is going to join the team in the upcoming season. Jimmy liked a post of Mike Hesson who is a former coach of Newzealand team. In August, RCB roped in Mike Hesson as their Director of Cricket Operations and Simon Katich as the new Head Coach.

Jimmy Neesham liked the post of Mike Hesson announcing the players list of RCB which made the fan think that Jimmy is going to join the team as player. The fan wrote “Welcome aboard JimmyNeesh” wrote the fan in his account by posting the screenshot from Instagram.

On seeing this post from the fan, Jimmy who is very much known for his witty replies in social media platforms such as Twitter and Instagram has wrote “I liked @CoachHesson ’s Instagram of his new house, doesn’t mean I’m moving in 😂😂😂”

With this denial, Jimmy Neesham replied to another fan who asked him whether he would like to join the team Sunrisers Hyderabad. To that comment Jimmy said that he would follow Kane Williamson (his national team captain) out of trenches. “I would follow Kane out of the trenches wherever that may be” read the tweet of Jimmy.

I would follow Kane out of the trenches wherever that may be https://t.co/1KTCChOY9Q

Royal Challengers Bangalore, the Indian Premier League franchise, retained 13 players while releasing 11 ahead of the auction in December in Kolkata.

Check out the players they released here :

What do you think on these replies of Jimmy Neesham ?? Comment your views below !!