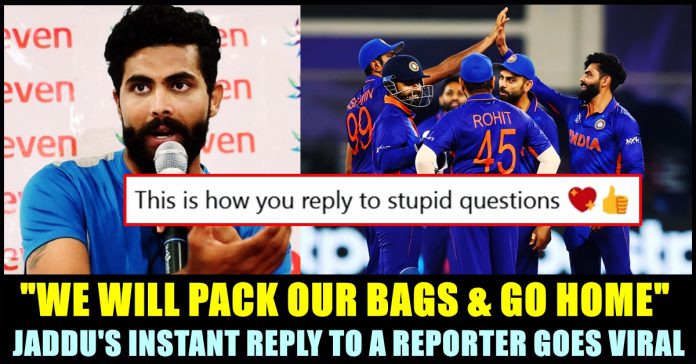 Ravindra Jadeja who received Man of the Match award for the performance he pulled off in India’s match against Scotland. The Men in blue comfortably won the match by chasing 80 plus runs in just 6.3 overs to increase their net run rate. Now, all rounder Ravindra Jadeja who is pretty much famous for winning matches for the team he represents, gave a cheeky reply to a reporter who asked what would happen if Afghanistan loses to New Zealand on 7th of November. The cricketer said that team India would back the bags and go home, in a way of asking what is the choice left.

When India needed to win the match within 7.1 overs to maintain a decent run rate in the tournament to stay alive, openers KL Rahul and Rohit Sharma helped the team to finish it on the 7th over itself. In 6.3 overs, team India chased down the 85 runs scored by Scotland and moved to the 3rd spot in the table after Pakistan and New zealand. Rahul scored an eighteen ball 50 and Sharma scored 30 runs with 2000 strike rate. Suriya kumar Yadav completed the rituals by smashing a sixer.

Virat Kohli who celebrated his 33rd birthday, in the presentation ceremony said that it will be interesting to see what happens on the 7th of November. Kohli said that he wanted to restrict Scotland within 110-120 and chase it in 8-10 overs bracket but expressed his happiness over the way things went. Ravindra Jadeja was named as the man of the match for picking 3 wicket by conceding just 15 runs in the four over he bowled.

“I was enjoying bowling on this track today. The odd ball was turning, I was enjoying very much. The first one (Berrington’s wicket) was a special one, whenever you get a batsman out with a turning ball, that’s always special. We were looking to play good brand of cricket. Everybody knows that we had to win with a big margin for us to up our net run-rate, we were looking to play our best game and give our 100% on the field. Everybody’s happy, one more game to go, hopefully we play like this. If we play like this, nobody can beat us. In T20 format, we have to play like this, that is for sure” the left hander said during the post match presentation.

Meanwhile, in the press meet, a reporter asked Jaddu “Everyone’s saying that we will have a chance if Afghanistan beat New Zealand. What will you do next if Afghanistan doesn’t beat New zealand?” and the cricketer immediately replied saying “Then what ?? we will pack our bags and go home”

Check out some of the reactions that surfaced for the reply of Jaddu :

This is how you reply to stupid questions 💖👍

Jadeja while saying this pic.twitter.com/zz6vlv4Jn4

Journalism standards have gone down the pan. What a ridiculous question.

Fans of actor Rajinikanth and Vijay are actively involved in verbal spat in social media platforms over which star holding the record of collecting...

Due to the relaxation in lockdown implemented by the ministry of home affairs, large number of people gathered outside liquor shops in Bengaluru on...