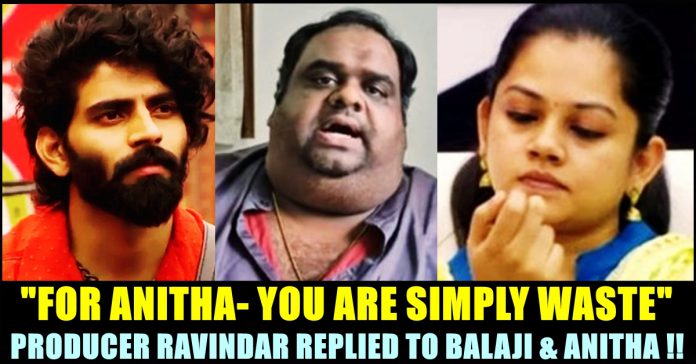 Producer Ravinder Chandrasekhar who reviewed the Bigg Boss reality game show, replied to the accusations of Balaji Murugadoss and Anitha Sampath through his official Face book handle. His post surfaced after Balaji Murugadoss said that he is returning the award provided by Behindwoods youtube channel. He alleged that the channel failed to telecast his award winning moment and his speech about the Bigg Boss reviewers of the Behindwoods channel. Anitha Sampath stretched her supportive hand to her Bigg Boss house mate by uploading a story in her Instagram handle.

Replying to their allegations, Ravinder came up with a long post saying that Balaji could have avoided attending the award show conducted by Behindwoods if he didn’t like the way they reviewed the show. After saying that he avoided attending the award show when they invited him to give award to a prime Bigg Boss contestant, Ravinder said that he Bigg Boss contestants receiving award sounds funny to him while real achievers from various industries are going unrecognised.

“I know for matter of fact in my tamil nadu people who achieved in various industry and specially sports who watch these awards will feel bad and painful to know being in bigboss house 100 days with salary paid inclusive all luxury finally been titled as Singapenney or claiming some other fancy title and recieving award sound funny to me.” read the post of Ravindar. “The real hero and bold people who representing our state and nation on various competitions been still not identified and honoured.” he added.

Ravindar further said that he would have appreciated Balaji if he avoided the award on the stage saying Behindwoods defamed him. “Secondly, you had great chance to avoid the award on the stage infront of the whole faternity confessing that behindwoods defamed me so am returning. That would be the sensational guts and would have appreciated if you claim as ur concern.” the film producer said.

Ravindar also said that it is neither Behindwoods nor Anchor Tara reviewed the show but himself. He went on to list out the incidents where Balaji lost his nerves. He said that people like Pugazh, Shivaangi, Ashwin, Bala and Sharath achieved something with their skill. Ravindar also invited Balaji for a face to face interaction post pandemic.

“For Anitha – you are simply waste. You must learn not to allege false information. The people whom u r targeting is suresh sir and velmurugan sir for interview they gave behindwoods been paid to defame other contestants. Its cheap to talk something baseless. you mentioned in proud u r there 85 days.” Ravindar said while replying to Anitha sampath who supported to Balaji Murugadoss.