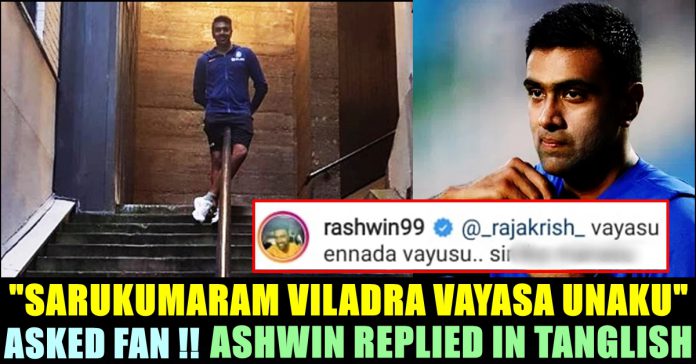 Celebrities receiving positive response from their followers in social media platforms for giving a reply to troll is not something new in this digital era. But this recent reply from cricketer Ravichandran Ashwin to his follower who trolled his age factor is truly motivating and very much relatable as the cricketer used his mother tongue Tamil to communicate with the truler.

Ashwin who is very much active in social media platforms, is currently enjoying 20 lakh followers in Instagram. The cricketer has been updating about his routines in the photo posting social media platform. The cricketer is very much known for his witty replies and the way he interacts to his followers as well. In his recent post, Ashwin reiterated a life philosophy while replying to a troller, in a way of making his followers realize about how important being happy in life is.

The recent post of Ashwin contained a picture of himself posing for a picture which was captured by fielding coach Sridhar in Wellington of New Zealand. “The streets are full of stairs. #wellington#traveldiaries .” the caption of Ashwin read.

To this post, on seeing the way Ashwin standing, one of the cricketer’s follower trolled him for playing between stairs at this age. “Sarruku maram veldara vayasa na unaku 😂” he wrote in his comment which is similar to a popular comedy dialogue of Vadivelu from the movie “Winner”.

Ashwin who saw this tweet, immediately replied to the troller by saying that there no age restriction to laugh. “If you have the heart to laugh, you can play whenever you want” reply of the cricketer said. “vayasu ennada vayusu.. sirrika manasu irruntha pothum eppo venunaalum sarukku maram vilayadalaam.😂”

This comment from Ashwin received overwhelming response from his followers whereas one them complitented it by saying that it can be written behind an auto. “For that I should buy an auto as soon as getting there, Could ask actor Vivek sir some ideas as well” said the happy cricketer.

Ashwin, being a bowling all rounder, has done some tremendous achievements for team India. Starting his career as a opening batsman, Ashwin turned as a off spinner and excelling in it till now. The 33 year old cricketer captained Punjab in IPL tournament and is going to play for Delhi in the upcoming tournament.

Comment your views on this humorous nature of the cricketer !!

Previous articleA.R Rahman’s Daughter Replied To Criticisms !!
Next articleChennai Man Tried To Escape Abroad After Loving A Girl For 4 Years !! Check What Happened

Actor Vijay's gesture of riding cycle to the polling station in order to cast his vote became the talk of the town. Many people...

On Wednesday, Tamil nadu chief minister MK Stalin announced a compensation of Rs. 25 lakh to the families of 43 Doctors who had lost...