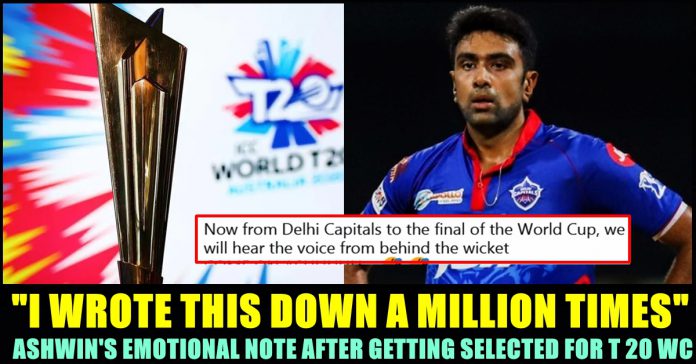 India’s prominent off spinner Ravichandran Ashwin made his come back into the white ball cricket after four long years. His inclusion in the 15 member squad for the upcoming T 20 world cup tournament came in as a surprise to the fans of team India. The cricketer who is forced to warm the bench in the ongoing test series against England, came up with a post in his official twitter handle to express his emotions over getting selected to team India. Ashwin referred to a quote that he wrote million times in his diary before putting up in his wall.

Chief selector and former Indian cricketer Chetan Sharma, while speaking to media on Ashwin’s selection, said that Ashwin has been playing IPL regularly. “He performed well in the IPL. The wickets are likely to be low and slow as the latter half will be played in the UAE and that will help the spinners. When you go into the Wordl Cup, you need an off spinner.” Sharma said.

“Spinners will get assistance so having an off spinner holds the key. Washington Sundar is injured. He has performed well in the IPL so that is why he has found a place for himself in the squad” Chetan Sharma added. Board of control for cricket in India announced the squad for team India for the upcoming T20 world cup which is going to take place from 17th of October in UAE.

Reacting to his inclusion to the Indian team after 4 long years, Ashwin came up with a tweet writing “2017: I wrote this quote down a million times in my diary before putting this up on the wall! Quotes that we read and admire have more power when we internalise them and apply in life. Happiness and gratitude are the only 2 words that define me now.” in his handle.

The quote Ashwin referred read “Every tunnel has light at the end of it. But only those in the tunnel who believe in the light will live to see it”

2017: I wrote this quote down a million times in my diary before putting this up on the wall! Quotes that we read and admire have more power when we internalise them and apply in life.

Happiness and gratitude are the only 2 words that define me now.🙏 #t20worldcup2021 pic.twitter.com/O0L3y6OBLl

The tweet garnered wide reach in no time. Many fans came up with reply tweets, wishing Ashwin the best for the upcoming tournament.

Congratulations Ash. You've earned this. Make it even more special 💙

Now from Delhi Capitals to the final of the World Cup, we will hear the voice from behind the wicket
COME ON ASHHHHH…. 🤣 🤣

“Why Are You Using Mask?” Check How Sherin Replied !!

Sherin who debuted in Tamil film industry through "Thulluvadho Ilamai" got confronted by one of an Instagram user for using safety mask due to...