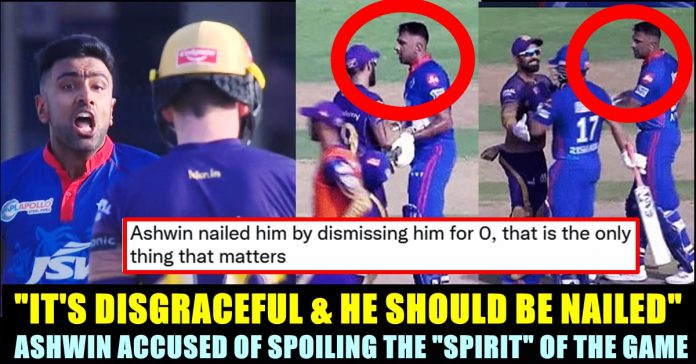 In the match that took place between Delhi Capitals and Kolkata Knight Riders on Tuesday, a verbal spat took place between ace spinner Ravichandran Ashwin and England Captain Eoin Morgan. over Ashwin trying to get the second run after the ball hit the pads of his partner Rishabh Pant. Initially Ashwin had a conversation with bowler Tim Southee and the conversation turned argument after Eoin Morgan intervened to exchange words with the Chennai born spinner.

“At the moment, I am happy that I played peacemaker and things have come to a good standstill right now” Karthick said in a virtual press conference. Later the match, when Morgan came in to bat, Ashwin got him out for a duck and celebrated the wicket in an aggressive manner.

The incident caused various kind of reactions from the viewers. Veteran spinner Shane warne accused Ashwin of spoiling the spirit of the game. “It’s pretty simple – it’s disgraceful & should never happen. Why does Ashwin have to be that guy again ? I think Eoin Morgan had every right to nail him !!!!” he said in his tweet.

The world shouldn’t be divided on this topic and Ashwin. It’s pretty simple – it’s disgraceful & should never happen. Why does Ashwin have to be that guy again ? I think @Eoin16 had every right to nail him !!!! https://t.co/C2g5wYjeT6

Warne facing the wrath of Indian fans after accusing Ashwin. Several other reactions supporting the cricketer also surfaced in the micro blogging social media site. check out some of them below :

Indeed it was disgraceful and should have never happened pic.twitter.com/CoV5PTXyOH

This character assassination of Ashwin is appalling. He simply goes by the book & it's foolish to nail him for this. The problem lies with this 'Spirit of Cricket' book which isn't quite in sync with the laws of the game. Fix that issue first. Ash is a champ & we are proud of him

Ashwin nailed him by dismissing him for 0, that is the only thing that matters

Lol. Why didn't Morgan take back the 4 runs that ricocheted off Stokes bat? Nz would have won the World Cup. Don't say because it went past the boundary, it was beyond the batting team!!

And yeah, Morgan nailed Ash beautifully yesterday by getting out for a grand 2-ball duck. https://t.co/CZLnrsWA43

Previous articleIndraja Shared About Her Massive Transformation After “Survivor” Show !! Check Reactions
Next articleSamantha Finally Reacted To The Unwanted Rumours About Her Personal Life !! WATCH

Dhoni Seeked Advice From This Tamil Actress To Join Ziva In School ??

Many people from various field are sharing their favourite moment of Mahendra Singh Dhoni that took place on and off field as he announced...