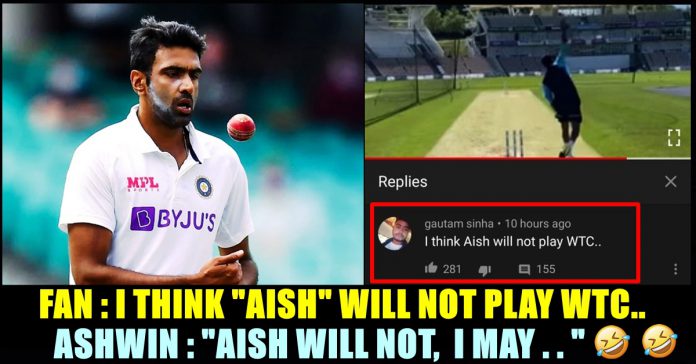 Ravichandran Ashwin is known for providing savage replies to his followers in social media platforms, recently took time to reply to a user who said that he won’t be playing the final of World Test Championship against New Zealand. India is going to play the final match of World Test Championship against New Zealand on 18th of June at Southampton, England. Team India had reached the venue and is currently involved in practicing.

A good Day 1 at office for #TeamIndia at the intra-squad match simulation ahead of #WTC21 Final 💪 pic.twitter.com/TFb06126fr

Ashwin is busy sharing the videos and pictures from his practice sessions. He has been adding humorous captions to his posts.

It is very well known that Ravichandran Ashwin is also running a youtube channel in his name and is enjoying nearly 7 lakh subscribers. Most recently, he uploaded a short video of himself involving in bowling practice with “They Call Master” as background song.

The video garnered 3 lakh views with 25K likes in no time. Among the enormous number of comments, a fan who thought that Ashwin will not play the finals of World Test Championship, wrote “I think Aish will not play WTC..”

Pointing out the spelling error he made in his comment, Ashwin trolled him replying “Aish will not ! But I may play”

After replying, Ashwin also pinned the comment. This reply left his followers in splits and the screen shot of it is going viral in other social media platforms as well.

Recently, When Sanjay Manjrekar ruled Ashwin out from his “All time great” list, Ashwin uploaded the picture of the most famous dialogue of Vikram from Anniyan through which he would say “Apdi sollatha da Chaari, Manasellam Valikkirthu” which is translated as “Don’t say that Chaari, it hurts me”.

Ashwin added the tweet with laughing and “stars in the eyes” emoji and it is worth mentioning now that his twitter bio reads “Sarcasm and optimism my forte.”

The bowling all rounder who hails from Tamil nadu,is the fastest Indian bowler to reach the 50-, 100-, 150-, 200-, 250-, 300-, 350- and 400-wicket mark in Test cricket in terms of number of innings. In 2016, he became the third Indian to win the ICC Cricketer of the Year award. He is currently the highest ranked spinner in Test cricket, and the highest ranked Test bowler for India on the ICC Player Rankings.

The cricketer has picked 401 and 150 wickets in Test and ODI cricket respectively. He has picked 29 five wicket hauls in test cricket and has represented a number of teams in the Indian premier league. After representing Chennai Super kings and Kings 11 Punjab, Ashwin is currently representing Delhi Capitals.

Former Indian cricketer Sreeshanth's bold statement of celebrities donating to PM Cares and CM cares amidst the COVID 19 crisis has impressed the users...

Did Anupama Just Revealed Her Relationship With Bumrah By Striking This Pose ?? Hilarious Reactions !!

At 25, Indian bowling attack's main man Jasprit Bumrah has cemented a place in the squad and the hearts of every death-bowling lover of...