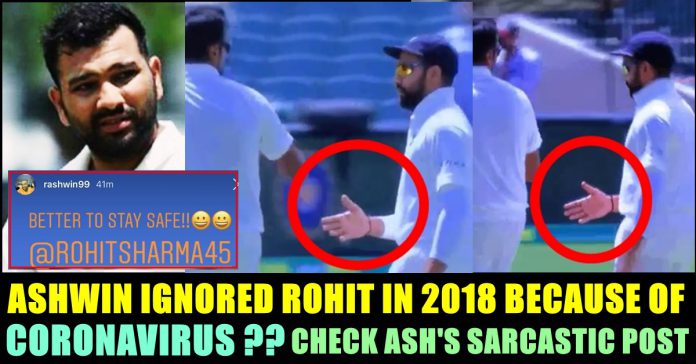 An old video of Ravichandran Ashwin unknowingly ignoring Rohit Sharma to shake his hand after taking a wicket went viral on social media in 2018. After completing the wicket taking over, while Ravi Ashwin was running back to his fielding position, Rohit Sharma came to him to congratulate on the fantastic over. But the offie was busy speaking to someone and literally couldn’t spot his teammate even as Rohit offered a shake of hands to him only to end up returning by patting on his back.

This video garnered extremely hilarious response from the users of Twitter. Check out some of them below :

Watch the video Ashwin uploaded below :

As far as coronavirus is concerned, it is considered as one of the dangerous threat as of now across the world. The disease started infecting in China and caused several deaths. Now it has been reported that the disease started spreading in India which resulted in three persons in Kerala getting hospitalized few days ago. The lethal disease has killed more than 1100 people in China and has spread to over 20 countries across the world.

Recently, a man named as Balakrishnayya from Chittoor district in Andhra Pradesh killed himself after suspecting that he had Coronavirus. He did by believing that he is going to prevent the disease from spreading from him to his children and to his villagers. Union health minister Harsh Vardhan has announced that 22 new positive cases of coronavirus have been found in India.

Previous articleGautham Menon Refused To Do This One Thing While Acting In “Kannum Kannum” !!
Next articleSivakarthikeyan Acted With Trisha Before Entering Cinema ?? WATCH

Internet Reacts After Abhinay’s Wife Dropped His Name In Instagram !!

Viewers of Bigg Boss show has been reacting in Internet after seeing the reports on Abhinay's wife dropping his name from her Instagram handle....