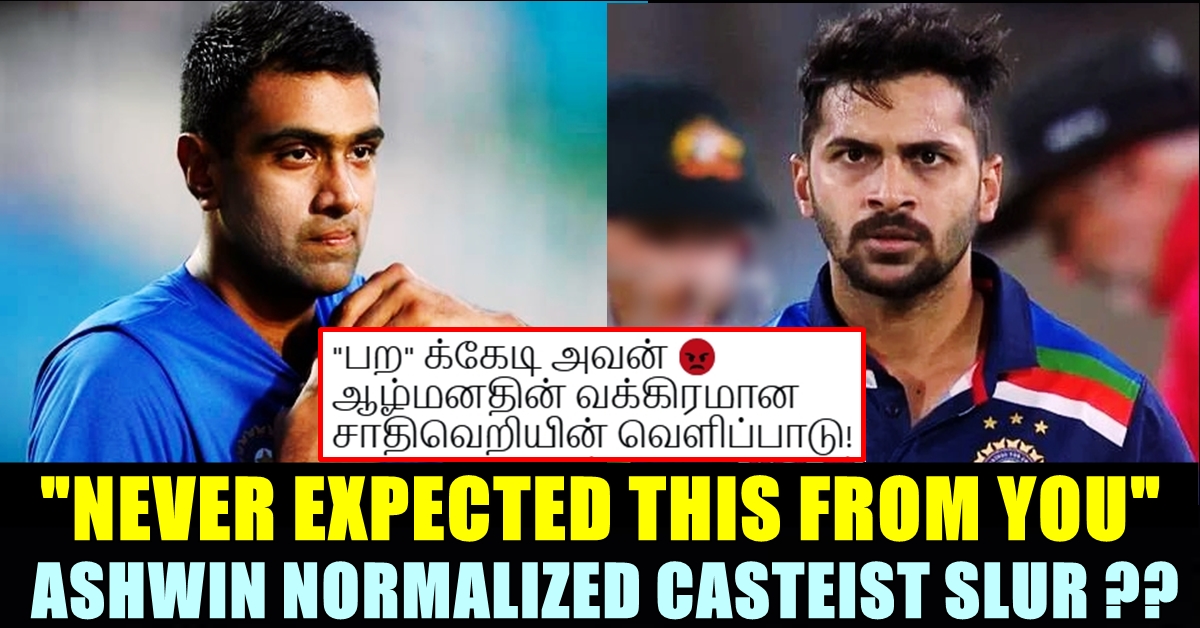 A set of twitter users emerged alleging that Indian cricketer Ravichandran Ashwin, along with Indian fielding coach Sridhar, used “casteist slur” to mention Shardhul Thakur in a latest youtube video. While a set of people countered the allegation saying that it is just a slang being used in the localities of Chennai, another set of people firmly said that it is a casteist slur and condemned the cricketer. They even demanded him to apologize for using that one particular word in his video.

Ravichandran Ashwin became a super hero after making a heroic 39 from 128 balls which played a major role in the result of the third test against India and Australia. Hanuma Vihari and Ravichandran Ashwin made a valuable 62 runs partnership from 259 balls. Team Australia declared their innings with a lead of 407 runs to win the match. However, Pujara, Ashwin and Vihari displayed quality batting and managed to stay till the end of fifth day to draw the match.

As expected Ashwin came up with a special video in his own youtube channel, narrating about what he went through during the third test match that took place in Sydney cricket ground. He talked about many things that took place during the test match including about how he batted throughout the fifth day to draw the match which helped team India to win the series. A special incident he shared about Shardul Thakur’s message from the dressing room while he was batting with Vihari impressed the internet.

“During the drinks break, Shardul came into the field and breathed hard for a while. I wanted him to say something. He said ‘they (people in the dressing room) wanted me to convey many things to you both. But I am not going to say anything. You two were playing well. continue to do it’ and I got puzzled and wondered what kind of message is this” said Ashwin to which Sridar responded by saying that Shardul Thakur is a “Parakedi” in a laughing manner.

Ashwin replied “I don’t know if he is a “Parakedi” or not but I think he would have seen our faces and avoided telling it”. Watch the video below :

Check out their reactions below :

Just wanted to condemn the use of ‘Parakkedi’ in the recent video by @ashwinravi99 and fielding coach Sridhar. Normalising casteist slurs in any context is not acceptable.

Coach Sridhar and Ashwin are seen using a casteist slur in a YT video.
To put things in context Cavani was banned three matches for using racist slur in an Instagram post.
Cavani accepted the sanction and tendered unconditional apology to fight against racism in football.

@ashwinravi99 Ashwin, Can you please explain what is பறக்கேடி? You happen to say “I don’t know if he is Parakedi or not” in that video to the person who is telling you “He is a Parakedi”.
Tell us what is Parakedi means. I want a clarification from you.
Thanks.

Meanwhile a number of twitter users came up with reactions defending Ashwin by saying that it is just a “local slang” used in Chennai. A twitter user said that Ashwin would have chopped it out if he was aware of the meaning of that particular word whereas another one said that Ashwin deserves benefit of doubt and said it seems unintentional.

I’m from Chennai, and I wasn’t aware of that being a casteist slur. I’ve heard some of my friends use it, will make them stop, but I’d give Ashwin the benefit of the doubt

Casteist slurs never acceptable, whoever uses them should be condemned. However, Ash clearly was shortening “பரமகேடி” to “பரக்கேடி”. For someone who plays with multiple team members at all levels, no way he has been casteist.

Anyway good thing that it has come out though. God knows how many people still use that term without even knowing what it actually means. I dont use that term, but i have seen people use it and i had no clue what it meant. Just thought it meant “periya kd”.