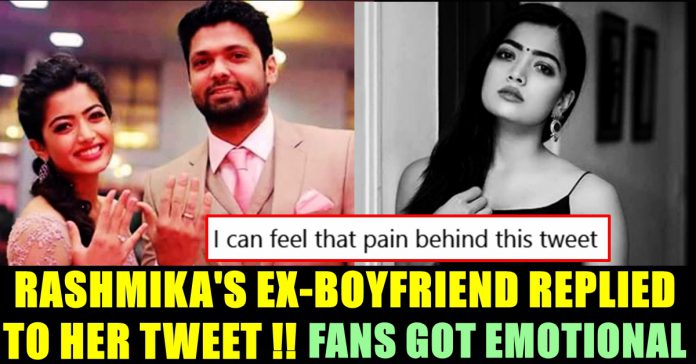 Rakshit Shetty, actress Rashmika Mandanna’s former boyfriend replied to a recent tweet posted by the “Dear Comrade” actress and the fans go gaga over it. The surprise tweet from the Kannada actor garnered huge amount of positive response from the users of twitter and is going viral across the social media platforms. He replied to a tweet of Rashmika in which she expressed her happiness over one of her songs receiving 100 million views in youtube.

Rashmika Mandanna is one of the very few actress who got fame and place in the hearts of many fans in a very short span. Despite being part of very few films, the number of fan pages in social media that emerged for the actress is sky level.

Rashmika Mandanna and Rakshit Shetty fell in love with each other on the sets of “Kirk Party” and got engaged in the 2017. However, they called off their engagement due to compatibility issues, according to reports. As soon as the news broke on the media, the “Geetha Govindtham” actress was subjected to lot of online trolls and abuses. During a film promotion, Rakshit requested her fans not to target her.

“You all have formed opinions about Rashmika. I don’t blame you because that’s how it is projected. I have known Rashmika for more than two years and I have known her better than any of you. Please stop judging her. Please let her be in peace” Rakshit told media during the end of 2019.

Now, Rashmika who is busy acting in south Indian films, came up with a tweet celebrating her “Balegaddu” song from “The Kirk Party” reaching 100 million views in youtube. She tagged Rakshit shetty who acted with her in the film an wrote “Belageddu – My first ever song.. Which I absolutely adore reached 100M.. I remember making this song mine.. Living through those montages.. And just finding Saanvi in me.. Ahh.. The journey.”

Belageddu – My first ever song.. Which I absolutely adore reached 100M.. 🤗🤍 I remember making this song mine.. Living through those montages.. And just finding Saanvi in me..✨
Ahh.. The journey.💃🏻✨@shetty_rishab @rakshitshetty @SamyukthaHegde @AJANEESHB @ParamvahStudios

As soon soon as getting notified by this tweet, Rakshit replied to it and encouraged the 24 year old actress to grow more. “Grow grow and grow girl. May all your dreams come true” his reply read.

Grow grow and grow girl. May all your dreams come true ☺️🤗 https://t.co/WVm6BM4smk

Many fans, especially boys got emotional on seeing this tweet of Rakshit. “A true Gentleman, nonetheless having a bad past with some people he is wishing good for them.” a fan wrote whereas another one said “I can feel that pain behind this tweet”

A true Gentleman 💯, nonetheless having a bad past with some people he is wishing good for them.

When loved girl breakup with u… But u still loving her n encouraging her to reach morw heights… This is rakshith shetty for u.. 😍#SanviKarna

❤️❤️❤️ kind hearted and kindest soul on the earth..love you sir..

Literally i am crying when i saw this post huge respect for you sir. ,👏👏👏👏👍👌

Fathima Babu became the first contestant to get eliminated from the third season of Bigg Boss Tamil. The started its first day by having Anchor...

Superstar who was last seen in Karthick Subbaraj’s “Petta”, is next to be seen in A.R Murugadoss’s directorial. The film which is planned...