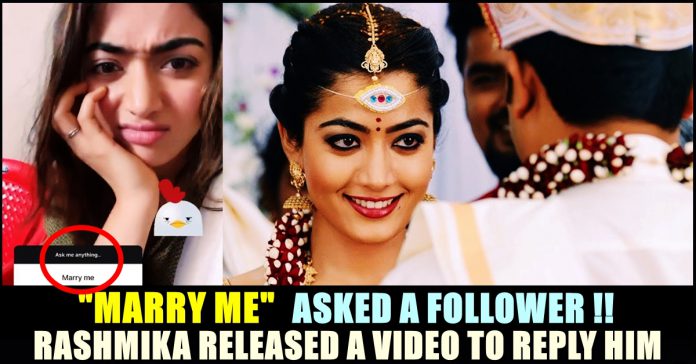 Rashmika Replied To A Follower Who Publicly Proposed To Marry Her !!

South Indian actress Rashmika Mandanna who recently made headlines after replying to a fan in Twitter who travelled 900 kilometres to meet her, conducted a question and answer session with her Instagram followers and answered to many of their questions. She even replied to a fan who proposed to marry him through the photo/video posting social media application.

Rashmika who recently appeared in a Tamil film named “Sulthaan”, is known for her works in South Indian film industry. A song from her Telugu film “Geetha Govindham” which starts like “Inkem Inkem” gained her the fame among the audience of South Indian film industries as it became a huge hit. She is also known for being interactive with her followers in social media platforms. Despite being part of very few films, the number of fan pages in social media the emerged for the actress is sky level so far.

The Geetha Govindam actress is one of the first candidate who believed to be paired with actor Vijay in “Bigil” but Nayanthara grabbed the role. However, she debuted in Tamil film industry through “Sultan” and is expected to pair with the top tier actors in coming days. Now, in a recent interaction with her followers, Rashmika answered to a fan who proposed to marry him.

The actress, with a twisted face, said “At least propose nicely, no” and uploaded the video in her story which is being spread in other social media platforms now. Watch the video below :

When a fan asked how many times she smoked cigarettes in her life, she replied saying “I hate smoking, I can’t stand people smoking around me”

Here’s what the actress said about pairing up with Thalapathy Vijay :

Replying to a fan who asked what she thinks about being called as a “National crush by fans”, the actress said “I like it.. I will take it”

Check out some of the screen shots of Rashmika’s other answers :

Recently, one of Rashmika’sardent fans named Akash Tripathi travelled all the way from Telangana to Kodagu, Karnataka to meet the actress at her home. He reportedly travelled 900 kilometres through train and auto, After reaching the area where Rashmika is living, Akash asked directions to her home to the people of the locality. They who grew suspicious informed the Police.

He was advised by the cops who arrived at the spot and they asked him to head back home. It is also notable that Rashmika was staying in her new house in Mumbai when he visited her house in Karnataka. Rashmika became aware of the unthinkable gesture of the fan and wrote a tweet expressing her emotions. She requested her fans not to get involved in doing such things She expressed her regret for not meeting Akash and hoped to meet him soon. The actress also said that she will be happy if she was shown love in social media platforms.

Guys it just came to my notice that one of you had travelled super far and have gone home to see me..
Please don’t do something like that.. i feel bad that I didn’t get to meet you🥺 I really really hope to meet you one day❤️ but for now show me love here.. I’ll be happy! 🌸🥰

Previous article45 Year Old Chennai Man Arrested Under POCSO For Sexually Harassing A +2 Student !!
Next articleSundeep Kishan Finally Reacted To The Anti-Vijay Tweets Of His Own !!