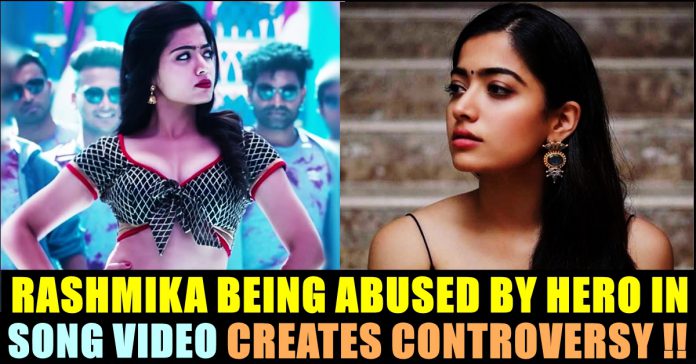 A new video song of Rashmika Mandanna’s upcoming film which was released on 2nd of April, created huge controversy in social media platforms due to the way it got portrayed. Rashmika Mandanna is one of the very few actress who got fame and place in the hearts of many fans in a very short span. Despite being part of very few films, the number of fan pages in social media for the actress is sky level. The Geetha Govindam actress is one of the first candidate who believed to be paired with actor Vijay in “Bigil” but Nayanthara grabbed the role. She also got considered for his “Master”. However, the actress is all set to make her Tamil debut through Karthi’s “Sultan”

Rashmika Mandanna who rose fame to Tamil fans through the song “Inkem Inkem” song from Telugu “Geetha Govindam” is enjoying a separate set of fans in social media platforms. Now, in one of her upcoming Kannada film “Pogaru”, the actress appeared in a song, video of which was released on the 2nd of April. In the video song, we can see the protagonist using his rowdyism to make Rashmika love her. This instigated huge controversy in social media platforms as the users of it seeing it as harassment against women.

In a way of encouraging woman harassment among youngsters, we can see Dhruva Sarja, who played the lead role, chasing Rashmika and physically abusing her. So far the song has been viewed by more than 1 crore people and liked by more than 2 lakh people.

Another actor named as Chetan Kumar raised voice against the song for its misogynist content, followed by whom many others slammed the song and the makers of it. “A Kannada film actor calls women ‘dog, fox, insect’ Acts in a song where as ‘romance’, he pulls heroine’s hair; threatens to electrocute & cut her throat; assaults women all w/ no consentNow wishes #AmbedkarJayanti w/ glorification of religious figure Sick, ironic, ignorant” read his comment.

Check out some of the reactions this song is receiving :

Acts in a song where as 'romance', he pulls heroine's hair; threatens to electrocute & cut her throat; assaults women all w/ no consent

The zero outrage over this horrifying song & video says everything about how regressive & toxic the Kannada film industry is.

Anybody who calls this out faces @DhruvaSarja's fans, who are only an extension of the sickness that is this waste of flesh.

Sam Jaisunder, director of "Scripture union", a Christian evangelical organisation in Tamil nadu, has been accused of sending inappropriate messages to girl children in...

Vishwaroopam 2 Trailer Released !! & Its A Sensation !!

Actor-filmmaker Kamal Haasan’s Vishwaroopam 2 is one of the highly anticipated Indian film sequels. For months now, rumours have been making the rounds that the film’s...

Suriya Got Stunned After Seeing the Stunt This Top Hero Pulled Off !!