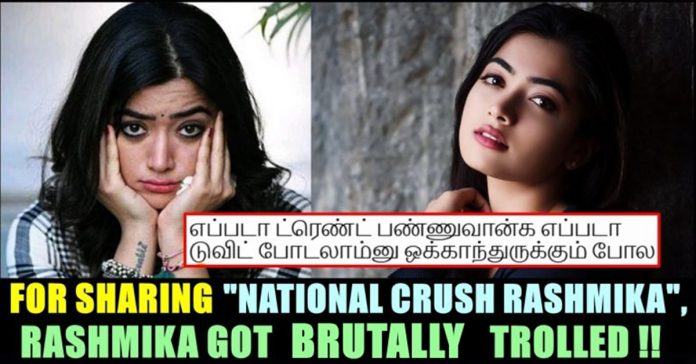 For sharing the screenshot of a hashtag “National crush Rashmika” to shower love on her fans, actress Rashmika Mandanna got trolled by a number of twitter users. Some of those who couldn’t accept Rashmika as “National crush” posted abusive comments as well. However, the tweet she shared garnered wide reach with enormous number of positive reactions.

Rashmika is yet to make her onscreen debut in Tamil films but the reach for her among the Tamil cinema audience is wide. A song from her Telugu film “Geetha Govindham” which starts like “Inkem Inkem” gained her the fame among Tamil cinema audience as it became a huge hit. She is also known for being interactive with their followers in social media platforms.

Recently, her online fans, trended a hashtag to prove that Rashmika is the “National Crush”. On seeing the hashtag trending Indiawide, Rashmika captured the screenshot of the same and shared it in her official twitter account writing “Woahhhhh!! My people are truly LEGENDARY!! They are so cute.. aren’t they? They have all my heart.”

Woahhhhh!! My people are truly LEGENDARY!! They are so cute.. aren’t they?🤗 They have all my heart. ❤️ pic.twitter.com/2TXrtN0vI6

Despite of the wide reach and positive reactions, a number of twitter users trolled the actress. “0% talent Overacting kaa baap Cheater Don’t know acting Overrated actress” wrote a twitter user to troll her.

As we all know, Rashmika gained fame and grabbed a separate place in the hearts of many fans in a very short span. Despite being part of very few films, the number of fan pages in social media for the actress is sky level. The Geetha Govindam actress is one of the first candidate who believed to be paired with actor Vijay in “Bigil” but Nayanthara grabbed the role. Now, Rashmika is debuting in Tamil with Karthi’s “Sultan”.