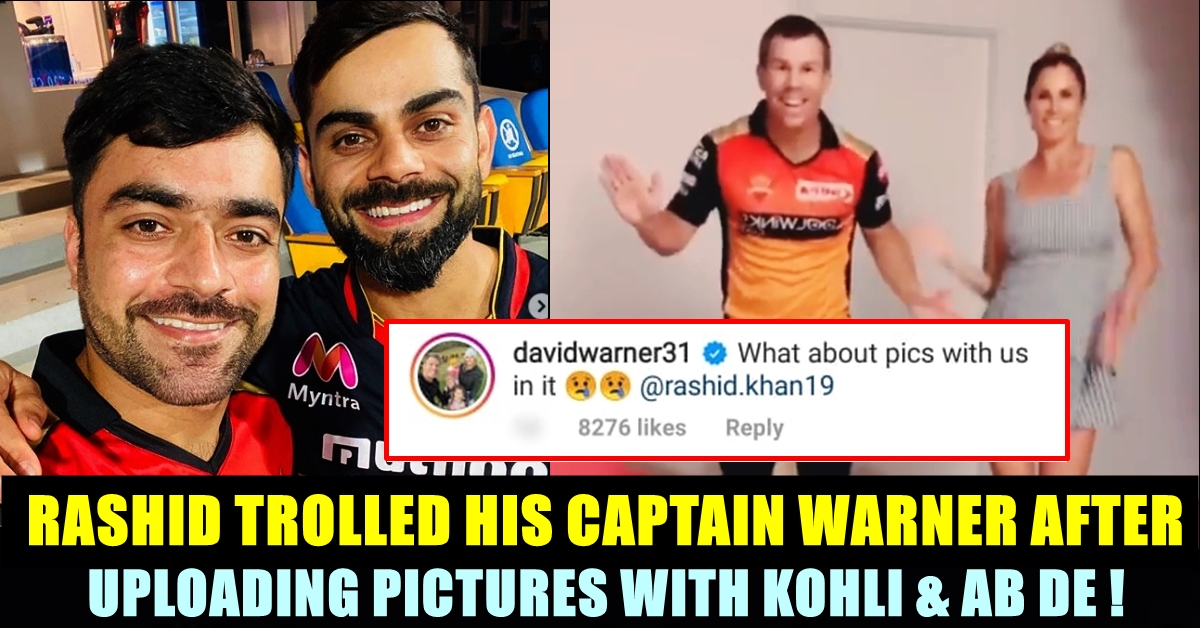 Rashid Khan of Sunrisers Hyderabad acts as a successful bowler of this ongoing IPL tournament. In the 13 matches he played, Rashid had took 18 wickets with an economy of just 5.07 runs per over. On Saturday, Sunrisers Hyderabad met Royal Challengers Bangalore in the 52nd league match of the tournament. In the match, Rashid helped his team by taking a crucial and by conceding just 24 runs in the 4 overs he bowled. Restricting team RCB for 120 runs, SRH effortlessly chased the target with 35 balls to spare.

David Warner, Australian opener who is currently captaining the SRH team, posted a cheeky comment in this post. The 34 year old asked why he hasn’t uploaded the pictures he took with him and other team members. “What about pics with us in it” he wrote with crying emojis.

Replying to this comment of his captain, Rashid trolled his Tik Tok making skills. He convinced Warner with a reply writing “we will put tik tok video together”

Check out the screenshot of his reply below :

David Warner is very much famous for his Tik Tok videos in India and most of his followers in the micro video posting mobile application are from India as well. Realizing the fact, Warner started making Tik Tok videos based on Indian movies, especially based on Telugu movies to impress the fans of his Sunrisers Hyderabad team.

He has been doing Tik Tok videos with his family since the lockdown was implemented. What started as a mere entertainment video, turned out viral as stars from India such as Allu Arjun encouraged the cricketer to do more.

Check out some of his Tik Tok videos below :

Woke the beast 😂😂 what can you see with your eyes at the end?? #challenge #gettingbetter #fun #justsmile

Sunrisers Hyderabad are highly believed to enter the play offs this season. With a solid run rate, the team looks promising to win against Mumbai Indians in the final league match of the tournament which is going to take place on 3rd of November.