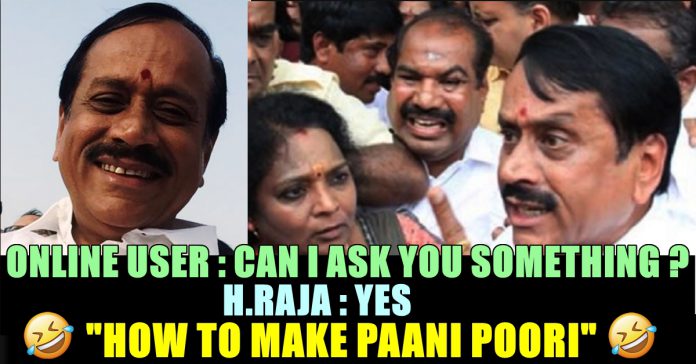 It is also believed by people that the film Mersal’s major promotion was nothing but the political stunts of BJP party members including Tamizhisai Soundararajan. Now the politician once again grabbed headlines for completely wrong reason. As we all know H.Raja’s twitter post’s comment section will always be filled with comments against him. Most of them will troll the politician for the unwanted controversies he is getting into. Yesterday one of a twitter user named as “Kathir” requested him to give an information about something which is only possible by H.Raja.

To this H.Raja told him to ask what information he needed :

To this Kathir mercilessly trolled the politician by asking him to provide information about making “Paani Poori” which is a popular North Indian dish. He asked Raja whether to make it with maida flour or wheat flour which cracked up many social media users. The reply cuurently having more than 1000 likes and 600 shares.

Check out some of the reactions to this reply :

What do you think on this conversation between Kathir and H.Raja ?? Comment your views below !!