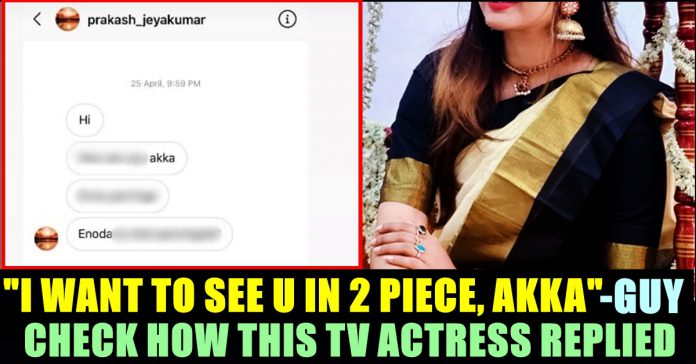 In this internet era we could hardly see a person who is not having social media accounts. The number of people who are using social media platforms to interact with unknown girls are way higher than the people who uses it to interact with their closed groups. In this case, TV actress Soundarya Nandakumar exposed a guy who tried to flirt with her by sending obscene texts after calling her “Akka” few days ago.

In this recent story of her, she exposed a guy who proposed her for a date. Soundarya didn’t hide his profile name and asked her followers to report. The guy also expressed his wish of seeing the singer and actress in bikini. The most atrocious part of his proposal is that the guy called her as “Akka” on 25th April. Yesterday around 8 PM, he send these texts it seems.

While sharing this screenshot, she wrote a caption which said “I hope my friends and followers here allow you to stay in one piece ! Report him and make sure he gets a taste of what he is people ! Ithula Akka vera ! Shameless Git “

Check out the screenshot of the story she posted here :

It is common for known actresses to receive such texts but one can’t expect every one of them to react in a same way. There are many ways to appreciate our favourite actresses for their looks but this is not one of the for sure. We have seen famous female celebrities being thankful to their fans for complimenting their looks but no one would like the way Prakash did it. It is high time for male Instagram users to find a better way to make their favourite celebrity respond and avoid ending up deleting an Instagram account for being exposed.

Previous article“Masturbate In Your Own Room”- Circular From Popular University ?? Notice Goes Viral !!
Next articleAfter All These Years, Vikram Prabhu Revealed An Unknown Fact About Rajinikanth During Chandramukhi Times !! UNBELIEVABLE !!