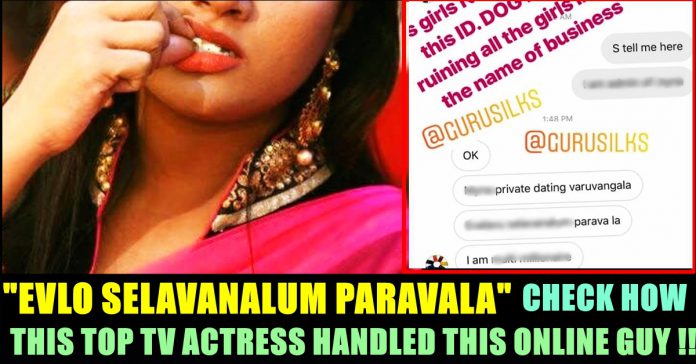 Nanthini aka Myna is a TV actress who shot to fame via the popular Vijay TV serial ‘Saravanan Meenachi’, where she played the character ‘Myna’. Following her success in serials, the actress has now landed a role in SK16, Sivakarthikeyan’s next movie.

She is one of the many Tv actresses who are very active in social media platforms such as Instagram and Twitter. Now to our shock, the actress has exposed a culprit who tried to misbehave with her through online. She posted the screenshots of the texts he sent to her and warned Girls to be careful with such people.

The Instagram story Myna posted shows the handle’s name as Guru Silks which makes us understand that he is cheating girls by posing the ID as it belongs to a textile store. “Myna Private Dating Varuvangala, Evlo selavanalum Paravala, I am a multimillionaire” the guy sent to Myna.

In a way of teaching him a lesson, the Saravanan Meenatchi actress captured the screenshot of it and posted it in her Instagram account by writing “Paarunga epdi some dog misusing in the name of Guru Silks. Pls girls and Boys beware of this ID. Dogs like this ruining all the girls life in the name of business”

Check out the screenshot she posted here :

As soon as she posted the story, the guy pretended like proposing Myna for a promotion which was also exposed by the actress. “Eppdi da ippdi irukkinga” she asked him after seeing his further messages. Check out that story here :

On the work front, currently she is appearing in number serials and reality shows in Vijay Tv and is expected to be seen in Sivakarthikeyan’s upcoming film “Enga Veetu Pillai”.

People in social media platforms such as Instagram, Twitter and Facebook often thinks that the things they are sharing in a private inbox of someone else is going to stay private forever. But it is high time for them to realize that it would become public sooner than they think and would spread faster than they assume.

Male Instagram users who admire their favourite celebrities in online must find a better way to make them respond and avoid ending up deleting an Instagram account for being exposed. What do you think on the way Myna handled him ?? Comment your views below !!