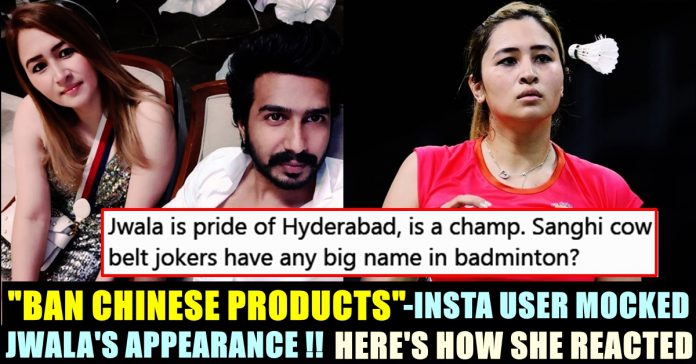 Along with cinema celebrities, people who are associated with them also becoming a subject to online trolling. Jwala Gutta, Indian professional badminton player and girl friend of Tamil actor Vishnu Vishal expressed her frustration over a random Instagram user who made fun of her appearance in her Instagram inbox.

Missing those days when we played dress up!! 🙄🙄 #lockdown #stayhomestaysafe #weshallovercome

As we all know, Social media don’t know the value of the emotions expressed by the celebrities in online medium. Many high profile celebrities got trolled and abused by random social media users in daily basis. Some would ignore those abusers once and for all and others would try to stop such abuses by exposing the culprits. Jwala who is pretty much active in social media platforms, in this incident, exposed the abuser and worried of the fact that the world is heading on a wrong path.

It has been widely believed that PM Modi has advised people of India to avoid chinese products and asked them to use products that are made in India to improve the economic state of the country and to bear China financially. Now, in a way of mocking her looks, the Instagram user, while replying to one of an Instagram story of the badminton player, said that Bhakts (supporters of Modi) are going to boycott Jawla.

Check out the screenshot Jawla shared below :

“So this is where we are actually heading!!!” said Jwala Gutta by posting the screenshot of the messages she received. Check out her post below :

So this is where we are actually heading!!! 👎🏻 pic.twitter.com/j6YqT0YdXS

Many of the social media users supported Jwala Gutta and stated that this is another form of racism, pointing out the recent trend “Black Lives Matter” caused by the demise of George Floyd. “Jwala ma’am don’t see them..we are proud of you and you’re great representative of our country” wrote one of an user. Check out some of their reactions below :

Sad to see the state of affairs in India. Just another form of #racism is going on at the next level https://t.co/brINYwbxgx

Jwala ma'am don't see them..we are proud of you and you're great representative of our country 😓👍👍👍👍 https://t.co/0fxBECSV5b

Determination will get you through anything!! ✌🏼💪🏼 #lifequotes #determined #halluhallu #storyofmylife #badminton

Jwala is pride of Hyderabad, is a champ. Sanghi cow belt jokers have any big name in badminton? https://t.co/2Jt67TTSS2

Sickening state of affairs. Racist #Bhakts get their ideas from white supremacists https://t.co/vzJcIGXGJS

She is currently dating Tamil actor Tamil actor Vishnu Vishal and the couple are posting cozy pictures of themselves for past few days. Comment your views on this derogatory message sent by the abuser to our nation’s pride !!

"CBI confirm SSR Murder" is trending in the micro blogging social media site with hundreds of fans demanding the officials to confirm the demise...