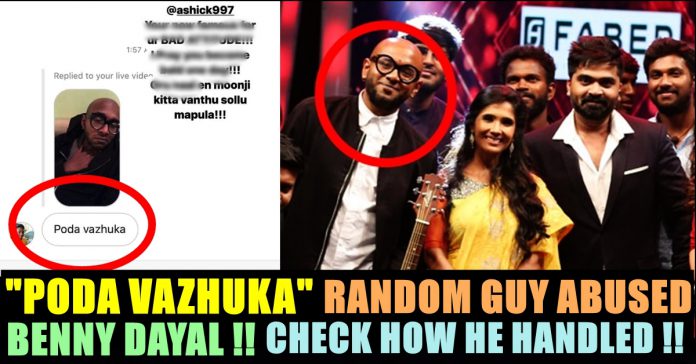 Internet trolling is something which almost every celebrity who are owning a social media account are facing in daily basis. Some won’t mind and would avoid reacting to the trolls they are receiving but some will intend to teach a lesson to the troller and will let them taste their own medicine.

Benny dayal, popular singer in country India is known for singing some phenomenal numbers such as Unakenna Venum Sollu from Ennai Arindhal, Madhuraiku Pogatha dee from Azhagiya Tamizhmagan etc. To one of his recent Instagram story, a random online user body shamed the singer by replying in his inbox.

He abused the singer with local tamil abusive word by pointing out his bald head. The singer who belongs to the second category in what we mentioned above, chose to teach him a lesson by making him famous. Benny screenshotted his reply and wrote “You are now famous for your bad attitude. I pray you become bald one day. Oru Naal en moonji kita vanthu sollu maapula ( I dare you to say this at my face one day)” in his story and shared it.

Benny didn’t forget to mention his account name to let people know as well. Being a prominent singer in Hindi, Tamil, Telugu, Malayalam, Kannada, Bengali, Gujarati and Marathi languages films, he is also one of the judge in famous Super Singer show. He is a member of the band S5 launched by the channel SS Music. He made his acting debut in the Malayalam movie By The People. The flick was a suspense thriller and all the songs were sung by S5 members and it was during that time when A.R. Rahman noticed him, and took an audition.

What do you think on the way Benny Dayal handled the guy ?? Comment your views below !!

A strong buzz surfaced regarding the release of Surya's most expected film "Soorarai Pottru". Being directed by Sudha Kongara who stunned audience with her...