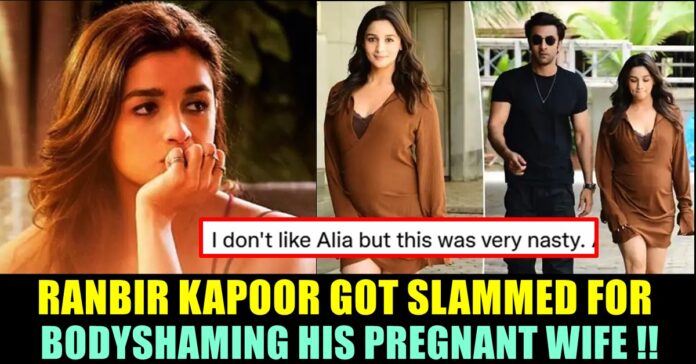 Bollywood actor Ranbhir Kapoor’s comment on his wife Alia Bhat’s weight gain left the actress to drop her jaws and is being slammed by netizens. The actor is facing the wrath of online users for making an “insensitive” comment about the actress’s baby bump, post her pregnancy.

The incident happened while the duo attended a live session with director Ayan Mukerji to promote their upcoming film “Brahmmastra” virtually. When asked why they aren’t going on a multi-city tour to promote the film, Alia Bhatt replied “We will promote the film, and we will be everywhere but if the question you are asking is why we are not phailod everywhere, right now our focus is…”

Ranbir cut in and pointed at his wife’s baby bump and said, “Well, I can say somebody has phailod”.The actor’s comment made Alia to drop her jaw in surprise which lead the actor to add that he meant it only as a joke.

During an interview, Ranbir Kapoor jokingly made a comment on Alia Bhatt for gaining weight post pregnancy. However, this joke has not gone well with Netizens. #RanbirKapoor #AliaBhatt pic.twitter.com/VMVBHePWEb

“ranbir is such a moron like why would you bodyshame your pregnant wife” said a social media user whereas another one said “I don’t like Alia but this was very nasty. Alia used to cry when other costars called her fat as a joke and her sister was bullied for ‘being fat’

I don’t like Alia but this was very nasty. Alia used to cry when other costars called her fat as a joke and her sister was bullied for ‘being fat’

He never loved her anyway.
He’s incapable of love after Katrina. Who knows how he’s treating her . She being her strong n independent self won’t even realise how him n his family treat her. She’s too busy to bother. But hope he doesn’t hurt her while she’s pregnant

People who call them Alia stans and believe this was cute. What sort of stans you are. Her face clearly showed she did not like Ranbir’s so called joke. During pregnancy woman gain weight which upsets them. Men just give their sperm & joke #AliaBhatt #RanbirAlia https://t.co/cWm3fS1u4w

Yes please slam him more. I am so angry. This is what happens when you are an entitled asshole calling his own pregnant wife fat. It’s just infuriating. And he is the superstar of this country? This small minded stupid thinking person? Just so sad to even think that. https://t.co/tmnz4dhog0

Previous articleSiddharth Vented Out His Emotions About The Release Of The 11 Accused !!
Next article“You Look So Slim” !! – Follower Said !! Check CWC Fame Pavithra Lakshmi’s Reply !!

Vimal is an Indian film actor, who predominantly appears in Tamil films. Following uncredited appearances and a cameo role in the critically acclaimed movie...