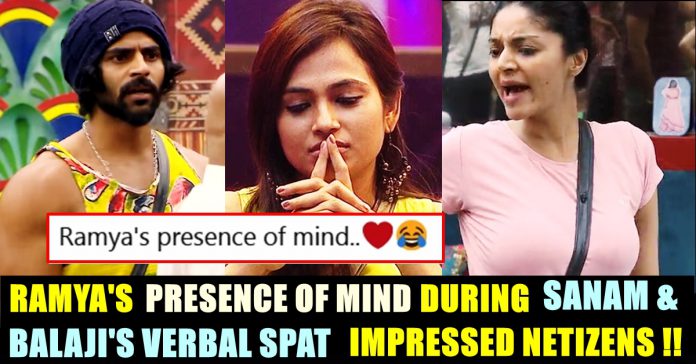 Ramya Pandiyan grabbed the attention of audience for the way he pulled the ladle Bala was holding while fighting with Sanam shetty verbally. After Sanam shetty criticized Balaji Murugadoss personally for calling her as “Useless” (Tharuthala), he approached her furiously. At that time, Ramya Pandiyan who was standing near, effortlessly grabbed the ladle he was holding to prevent things from turning violent. Followers of the show who noticed it, chopped the particular clipping and sharing it in social media platforms with various kind of reactions.

He who kept calm initially, started abusing her back after Sanam talked about his “confidence”. He raged towards her from kitchen asking why she kicked his back last night. At that time, Ramya Pandiyan who was standing there, pulled the ladle Bala was holding when he furiously walked towards her.

Many of the twitter users appreciated the upcoming actress for her presence of mind. “Good that #RamyaPandian plucked the #karandi from him. Otherwise it could have look violent.” wrote one of a twitter user whereas another one said “She is silent killer after all. Nalla presence of mind irukku”

Good that #RamyaPandian plucked the #karandi from him 😂👏
Otherwise it could have look violent.#BiggBossTamil4 https://t.co/iBSM77wwWk

Veteran actress Rekha got eliminated as the first contestant and Aajeedh became the second contestant to get evicted by the votes of the people. However, he used the free pass he earned in a task provided by Bigg Boss to stay inside the house. Vel Murugan got evicted as the third contestant.

Comment your views on this instant gesture of Ramya !!

Pooja Hegde who played the role of lead actress in Vijay's upcoming film "Beast", interacted with the fans and answered to their questions regarding...

Sanam shetty, one of the prominent contestants of Bigg Boss season 4, in her recent interaction with press reporter, confessed that she didn't get...