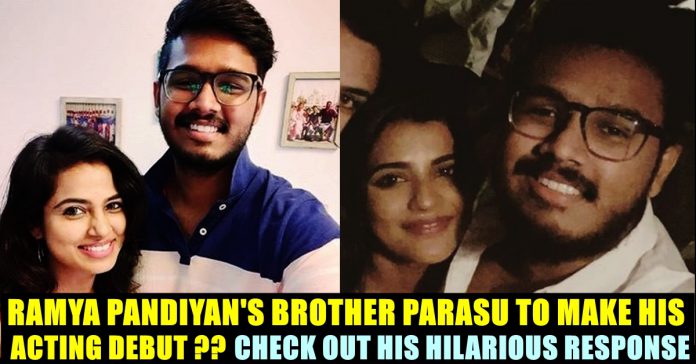 A buzz on Ramya Pandiyan’s brother Parasu Pandiyan debuting as an actor in Tamil film industry kept doing rounds in social media platforms since the morning of Wednesday. It was reported that the official announcement regarding the project is going to surface soon. In a way of clearing the air, Parasu Pandiyan himself came up with a couple of stories in his Instagram handle to deny the news.

Parasu Pandiyan who entered the Bigg Boss house during the “freeze” task, displayed a good bonding with all the contestants of the reality game show. In the short span, Parasu managed to grab the attention of the audience and also appeared in renowned youtube channels to talk about his sister’s participation in the Kamal haasan hosting show. Currently, he is pretty much active in Instagram with 35 K plus followers.

Parasu is a brother of actress Ramya Pandiyan who was highly believed to win the trophy of Bigg Boss season 4. However, she ended up as a third runner up. Being a daughter of director Durai Pandiyan, Ramya entered film industry by acting as a female lead in the critically acclaimed film titled “Joker”. After acting in a number of projects such as “Aan Devathai”, Ramya Pandiyan’s social media presence helped her to attain limelight.

Recently, she bought a new BMW car and the news came to light through Parasu Panidyan’s social media posts. Now, a buzz on the latter himself debuting in film industry as an actor emerged.

Buzz is that Ramya Pandian’s brother Parasu Pandian to debut as an actor in a Tamil Film soon. pic.twitter.com/2fcsvrI3BA

Reacting to this news, Parasu came up with a couple of posts in his Instagram account. He sarcastically said “Oh wow” in his first story by sharing the screen shot of the news bit.

In his next story, Parasu asked the media portal which shared about the news to tell more information about the project and trolled them by writing “Parasu himself doesn’t know about it”. He also added “Ole Ole Ole” song in the background to denote that the news is completely not true.

Going by his Instagram bio, Parasu is a video creator who is currently running a youtube channel. Ramya pandiyan recently got committed to a project bankrolled by Suriya’s 2 D entertainments. She is going to share screen space with actress Vani Bhojan in the film.

Previous articleYuvan Replied To A Fan Who Criticized His Facebook Post !!
Next article“Bakkiyalakshmi” Sathish Requested People Not To Abuse Him In Inbox !!