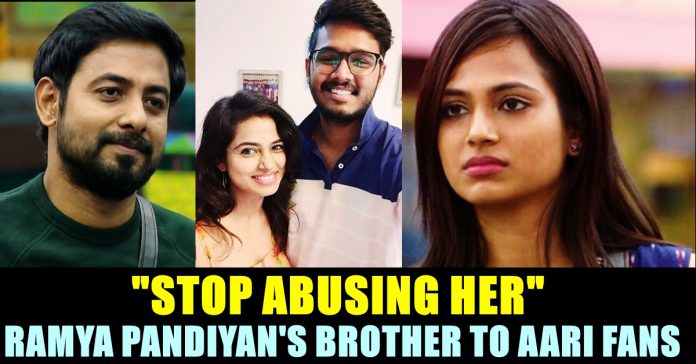 Ramya Pandiyan’s Brother Comes Up With An Emotional Post !!

Bigg Boss season four is nearing its end and only few contestants are staying inside the house, competing for the title. Ramya Pandiyan, Aari Arjunan, Balaji Murugadoss are the strongest contenders who are expected to clinch the trophy of Bigg Boss after Aarav Nafeez, Riythvikha and Mugen Rao. Fans of the above mentioned contestants are always involved in verbal spat with each other in social media platforms. Now, on seeing the comments of Aari’s fans, Ramya pandiyan’s brother Parasu Pandiyan uploaded an emotional post trying to make Aari fans understand that it is just a game show made for entertainment.

So far, the show has witnessed a number of controversies, confrontations, arguments, quarrels and some interesting physical tasks. Nine contestants including Archana Chandhoke, Aranthangi Nisha, Jithan Ramesh, Sanam Shetty, Samyuktha, Mirchi Suchi, Suresh Chakravarthy, Vel Murugan, Rekha got evicted from the show. Now, as the game gets tough contestants could be seen blaming each regarding various issues.

Fans using abusive language to degrade their favourite contestant’s rival became a practice in social media platforms. Now, on seeing the fans of Aari Arjunan abusing his sister, Parasu pandiya, brother of actress Ramya Pandiyan came up with an important message to them. He said that Aari himself wouldn’t encourage such activities in his post.

“Dear Biggboss Viewers & Fans, I’ve been seeing so many abusive posts and stories coming up in social media for my sister from Aari brother’s fans. It’s really not ethical to defame and abuse a female contestant personally just for playing their game with their own gameplay.” said Parasu in his social media post.

He further requested them to stop such behaviour in social media platforms. “Kindly stop this, even if Aari came to know about what his fans are doing he definitely would not feel happy or proud of his fans. I have high respect for Aari brother for his social work. protest & NGO implementation. Just because you Love a contestant don’t defame the other contestants in the show. Its a game show made for entertainment.” he said through his post and asked them to watch the show with sportive attitude.

“Let’s all watch it with sportive attitude take only the good things in it and make the deserving contestant win. Much respect to all the Ramya Pandian Fans who ve been patient & watching the show with proper sportive attitude. ) -Parasu Pandian.” his post read.

Ramya Pandiyan is known for acting in films such as Joker, Aan Devathai and gained widespread acclaim after a photo shoot that she conducted on her house’s terrace. Her presence in “Cooku with Comali” gained her the enough fame to participate in the reality game show. Aari who played protagonist in a number of films, was committed in Aleka, Maane Thene Paeye before entering the house entered and participated in Bigg Boss show as one of the contestants.

Previous articleYouth Lost Rs. 16 Lakh To Two Girls While Chatting With Them In A Dating App !!
Next articleFinally The Man Behind Bigg Boss Voice Revealed !! UNEXPECTED