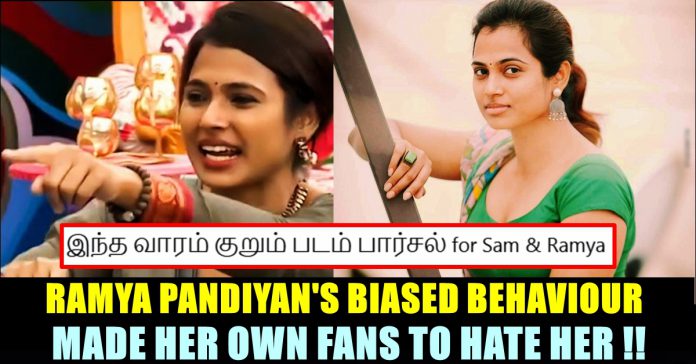 Ramya Pandiyan who was highly believed to win the trophy of Bigg Boss season 4, is slowly gaining haters due to her activities in the past few episodes that got telecasted. Ramya Pandiyan rose to fame among Tamil cinema audience through the pictures surfaced in the internet from her terrace photoshoot. She acted in films such as “Joker”, “Aan Devathai” etc.

After participating in the show, Ramya, initially grabbed the hearts of fans by expressing her opinions for the appropriate issues. However, in the past few episodes, the way she was laughing during serious issues irked the followers of the show. She also raising voice, supporting only selective contestants such as Balaji Murugadoss, Samyuktha etc.

On the 51st day, when Samyuktha called out Aari for calling her as “immature”, Ramya kept mum. Samyuktha argued that she never degraded anyone’s “upbringing”. Fans who are following the show for a long time, pointed out that Samyuktha already degraded Aari’s “upbringing” during court task. Sam who believed that Aari called her as “Tharuthala” during the court task, said to Ramya that Aari’s “upbringing” makes him talk that way. However, it is well known that Aari used that word only to make contestants understand how the meaning of the word changes according to the tone of the speaker.

Now, when Samyuktha argued that she never talked about anyone’s upbringing, Audience who saw Ramya keeping mum, started questioning why she is not voicing out now like she voiced out against Aari in the previous episode. They also released a “Kurumpadam” for the duo.

“Now I understood Y Ramya is sitting as Judge in KPY comedy show. Bcoz, she is showing her 32 teeth always!!!” said a follower on Ramya’s attitude whereas another one said “Ramya you lost my girl! You officially joined Bullying gang.”

Now I understood Y Ramya is sitting as Judge in KPY comedy show. Bcoz, she is showing her 32 teeth always!!!

Many times, showing tat 32 teeth mannerism is irritating to the core.

Sam court task apromave said aari valarapu seri illa ramya was with her listening to it.
Again today she meant aari only.
Ramya knows sam said that about aari and still over sombu for sam.
Sam knows she said about aari before and today again so diverted topic.#BiggBossTamil4

Exactly this is what I felt. When #Bala says #Aari gave up his captaincy for #Rio, all turned against him and #Ramya pointed his comment on #Samyuktha‘s captaincy issue. But no one mind to ask #Samyuktha why she said about valarppu. https://t.co/0ClP46f7J4

#Ramya always support who is against #Aari and tell points against aari but took #Sombu for bala and Sam team always..#BiggBossTamil4 bala spoiled Sam chance of winning but aari gave his chance diff there..ramya I won’t to see ur voice against Archana bala and samyuktha

Ramya you lost my girl!

Previous articlePeople Lauding Chief Minister For His Reply To A Youngster Amidst The Crisis !!
Next articleVivekh Replied To The “Kedar Jadhav” Cyclone Meme !! Check Reactions

Shocking: Chennai OLA Driver Threatens A Woman To Slit Her Throat & The Reason Why The Driver Misbeheaved Is Very Silly!

Most women these days prefer cab services as their mode of transportation even during late evenings and nights. But the recent incidents about these...

Natty Replied To People Who Abused Him After Watching “Karnan” !!

Natty aka Nataraja Subramaniyam who played the role of an antagonist in the recently released Maari Selvaraj directorial, uploaded a tweet in his official...