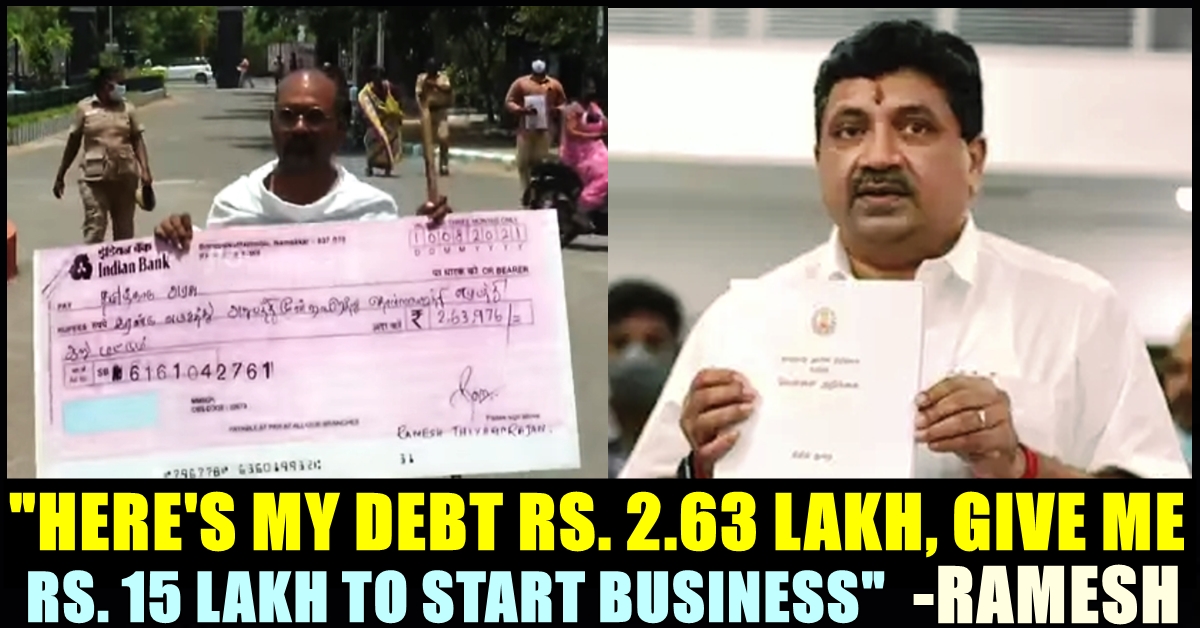 Tamil nadu finance minister Dr. Pazhanivel Thiagarajan, released a white paper highlighting the alleged mismanagement of funds during the previous AI ADMK governance. The minister promised that the deterioration of the state’s finances during the past seven years would be set right in the next five years. On knowing about the debt amount mentioned by the finance minister for per family, an individual who belongs to Namakkal district, approached the collector office of the district to pay his family’s debt off.

Dr. Palanivel Thiagarajan, while charging that Rs 1 lakh crore has been lost due to mismanagement due to inefficiency during the AIADMK regime, said that the revenue deficit stood at Rs 61,320 crore for 2020-21 (3.16% of GSDP). The revenue deficit has been increasing for eight years and Tamil Nadu has become a chronic revenue deficit state since 2013. As of now, the public debt in the state is Rs 2,63,976 per family, he said in his statement.

The white paper released by the finance minister, highlighted “Between 2006-13, in 5 out of 7 years, TN had a net revenue surplus. Since 2013, revenue deficit has become a recurring phenomenon,”. The minister also mentioned that the white paper doesn’t indicate on government going back on its electoral promises. Debt Status, Revenue Trends, Expenditure Trends, Status of the Public Sector Undertakings (PSUs), Current Overall Growth, Sectoral Growth, Per Capita GSDP Growth and actions needed to set right the present situation are details the while paper contained.

On hearing about every family in Tamil nadu is indebted with Rs. 2.63 lakh, an individual named Ramesh Thiagarajan who is an ardent follower of freedom fighter Mahatma Gandhi, approached the collector office of his district with a cheque for the same amount. After paying the debt, he wanted the government to provide him Rs. 15 lakh to start a business. However, the authorities denied to receive his cheque.

“When poor and needy are willing to pay the debt, the government should receive the amount and should help them by providing Rs. 15 lakh to start a business which would improve the economic status of the state. I also requested the government to give me the Xerox copy of the document which mentions about the debt of my family” he said to the media after approaching the collector office.

Netizens Criticized Nayanthara After Seeing This Recent Video Of Her !! Check Why
Police Investigated Arya For Allegedly Cheating A German Woman !!