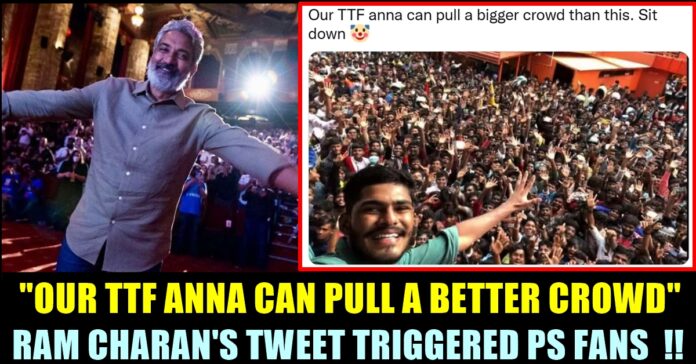 Telugu actor Ram Charan’s tweet about Rajamouli celebrating his “RRR” in a theatre located in United States, triggered a number online users who adore Manirathnam’s “Ponniyin Selvan”. They believe that the tweet by the Telugu actor was targeted on the release of “Ponniyin Selvan” which is being compared with “Bahubali” ever since the release.

Rajamouli’s “RRR” screened at the Chinese theatre located at the Los Vegas as a part of the Beyond Fest and received massively positive response from the crowd. With many standing in the queue to watch the film, director SS Rajamouli was also present in the theatre. While the videos from the event are doing rounds in social media platforms.

In one such video, a theatre full of crowd could be seen giving a standing ovation to the filmmaker as he entered the theatre for the Question and Answer session.

SS Rajamouli gets a rapturous, long standing ovation after #RRR at #BeyondFest pic.twitter.com/KGBKlCZeVR

Sharing the video, Telugu actor Ram Charan Teja came up with a tweet writing “One and Only @ssrajamouli Garu ❤️🙏” to express his love towards one of the best filmmakers of the country right now.

The tweet triggered the fans of “Ponniyin Selvan” as they believed that the tweet was targeted at director Manirathnam.

Our TTF anna can pull a bigger crowd than this. Sit down 🤡 pic.twitter.com/4N7eNAgZpe

The reason for this insecurity 💥💥💥 pic.twitter.com/LrZ4iZqIWS

This is why we said our kollywood should come together to celebrate our pride #PonniyinSelvan https://t.co/PuFv91G9uJ

However, fans of Ram Charan and Rajamouli countered the tweets saying that the tweet is not targeted at Ponniyin Selvan but just the celebration of RRR’s USA release.