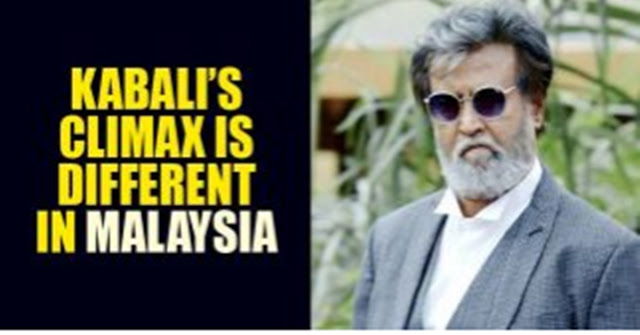 You are a ‘Lucky One’ if you got a chance to watch Kabali on the first day itself. There is already a lot of hype surrounding the movie and now, there is one more reason why ‘Kabali’ has made it to the headlines. Every year, there are loads of movies that are released in different languages, but have you ever heard that the ending of the same movie is different in different languages? No!

For Rajnikanth, everything is possible and if you aren’t aware let us tell you that the ending of ‘Kabali’ in it’s Hindi, Tamil and Telugu versions is different from that of the Malay version.
Now, in these 3 languages, a very ‘Happy family’ kind of ending is shown. In the Indian version, the screen blacks out with the sound of a bullet shot, leaving the audience suspicious. Audience kept thinking whether it is Kabali or his assailant who is shot dead. On the other hand, the Malay version ended on a different note. Have a look at the tweet;

#Kabali climax scene is different in Malaysia screening.It says ‘Kabali surrenders himself to the police’. pic.twitter.com/5lSrIaLqAu

In the Malay version, the screen blacks out with the caption “Finally Kabali surrendered to the police”. But everyone is confused as to why this type of ending only in the Malay version and not in others. There are several questions that came up; what does that bullet shot mean? Is Kabali dead? Why did he surrender? Has the director Pa Ranjith done this keeping in mind the nature of Malay audience? There was a tweet that suggested that this was due to Malay censorship requirement and has some political reasons attached to it!

@sri50 @Chrissuccess this is the requirement by malaysian censorship due to political reasons.

Usually, what we see in Rajnikanth movies is that he struggles a lot but at end he displays his unique style , thereby keeping his fans happy. Everyone is wondering as to why such a thing? Is this hinting towards Kabali’s sequel?
So guys what do you have to say about this? Do let us know your opinions in our comments section below!