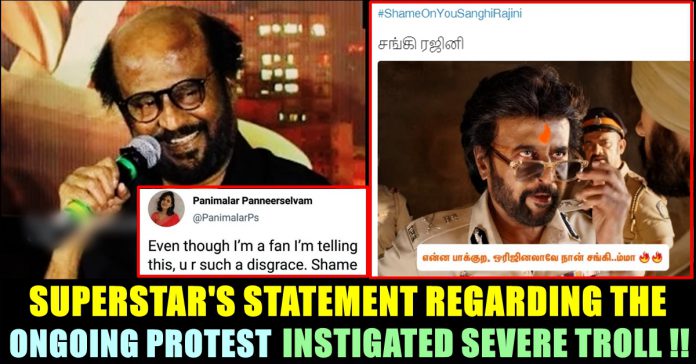 The new citizenship amendment bill which was passed recently led almost every celebrity to react on it. Makkal Needhi Maiam leader Kamal Haasan and Siddharth went one step ahead and stretched their supportive hand to the protestors on field. Superstar Rajinikanth who denied to disclose his stand regarding the act on Darbar Trailer launch, posted his statement in his official twitter account last night.

The yet to be politician who enjoys more than 56 lakh followers in Twitter wrote “Violence and rioting should not become a way to find solution for any issue. I request the people of India to stay united and vigilant keeping in mind the nation’s security and welfare,”. Further he wrote “Indian citizens should stand united and aware on the nation’s security and welfare. I am deeply saddened as because of the undergoing violence,” the actor and aspiring politician tweeted.

“The ongoing violence gives me great pain,” he added. The actor’s statement comes on a day when Uttar Pradesh and Karnataka were rocked by violence during protests against the amended Citizenship Act, with two persons being killed in Mangaluru in police firing.

Many who felt that there is no clarity in his statement which made them to trend a hashtag “ShameOnYouSanghiRajini in the micro blogging social media site. Check out some of their reactions :

He doesn’t always give a voice. But when he does he makes sure it’s for the oppressor. #ShameOnYouSanghiRajini pic.twitter.com/ohx559KnB4

#ShameOnYouSanghiRajini you couldn’t be more spineless.. if you can’t stand at the right side during dark times, what good are you gonna do to the society by entering politics? pic.twitter.com/y4TRpNjLFB

How low can you go Rajini?. This is a load of crap. I’m boycotting Darbar movie and down down Rajini #ShameOnYouSanghiRajini pic.twitter.com/8yihMuMybw

Meanwhile #IStandWithRajinikanth also trending in Twitter where the fans of the actor are defending the tweet of him. In Darbar trailer launch, when one of a reporter from Indian express demanded him to give his opinion on the attack on the Students of Jamia Millia University, the aspiring politician refused to answer the question by saying that it is just a cinema funcion. “I will express my opinion in a different platforms. not here. This is a cinema function” said the “Moondru Mugam” actor.

Express your views on the two different hashtags trending !!

Amidst the increasing number of positive COVID 19 cases, Canada's chief medical officer advised people to skip kissing while involving in sexual intercourse. She...

“I Was Waiting To Write Washing “TON” Sundar” – Dinesh Karthik

Washington Sundar, once again missed to score a century and this time, it is even more heart breaking comparing to the previous occasion in...