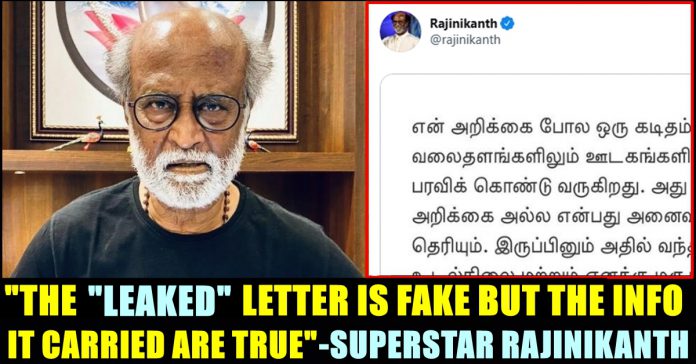 Superstar Rajinikanth who is expected to enter the Politics in near future, released a press note saying that the informations carried by a fake report that are doing rounds are true. The fake report Rajinikanth mentioned said that COVID 19 virus had hit his plans to contest in the upcoming politics. The letter reportedly indicated that the actor had been advised by doctors to restrict his movement since he has a kidney condition that is vulnerable to COVID 19 virus.

“I don’t worry about myself, not as much as about those who are around me” Rajinikanth said according to the fake letter that the actor had mentioned in his official tweet. The leaked letter said that Rajinikanth doesn’t want to take a chance during the pandemic especially he had a renal transplant in the US in the summer of 2016. The “letter” went on to report that doctors advised him not to take part in active politics with the absence of vaccine for the COVID 19 virus.

“I do not fear about my life. I am more concerned about people’s welfare. To usher in the political change I promised, I have to plunge actively into the political field. Midway through if my health gets worse, it could cause fresh challenges to the political process itself” the leaked message Rajinikanth mentioned said.

“It was not in my blood. I can’t think of being a Chief minister at all. You all know the incident that happened in 1996 where many influential people asked me to contest as CM. That is not in my mind at all. I will remain as party leader” he said at that meeting.

Sana Khan is known among Tamil audience for appearing in Silambarasan's Silambattam. She played as one of the lead actress in the film and...

Vijayalakshmi Feroz, who walked out of Nayagi daily soap, has entered the Bigg Boss Tamil 2 house as a wild-card entrant. The latest promo...