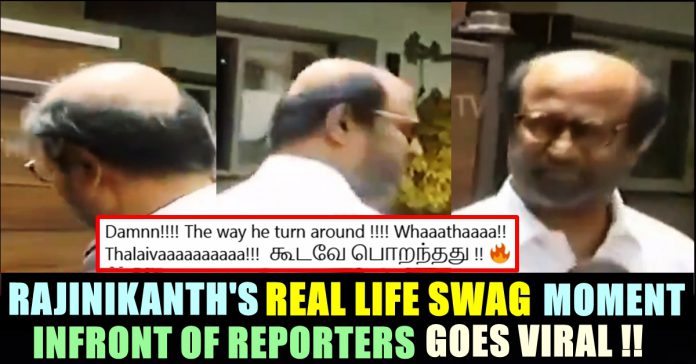 South superstar-turned-politician Rajinikanth has said the BJP “is attempting to saffronise” him but he “will not be trapped” — a comment seen by many as an attempt to end speculation he may tie up with Prime Minister Narendra Modi’s party. Referring to a recent controversy triggered by Tamil Nadu BJP, which released photos of ancient Tamil poet Tiruvalluvar dressed in saffron, the 68-year-old actor said he, like Tiruvalluvar, “would not get trapped”.

This statement made the fans of the actor very happy and what gained the attention of them more is the moment when Rajinikanth did a “Superstar moment” in front of the reporters. After answering to the reporters, Rajinikanth tried to leave the place but when the reporters kept calling him to answer more questions, Rajinikanth unexpectedly turned real fast to his right side which reminded the actor’s fans about his “Unique Swag” in his movies.

Two times today saw his swag which lit my screen,
1. One at RaajKamal function, that teasing look while addressing Actress @sripriya
2. That turn while addressing the media. #Rajinikanth Thalaivar(@rajinikanth) style paaah!!!

The actor’s remark about the BJP trying to “saffronise” him were made after actor-turned-politician Kamal Haasan and he unveiled a bust of late Tamil film director K Balachander at the Makkal Needhi Maiam chief’s production offices in Chennai.

Comment your views on his statements about being a member of BJP !!