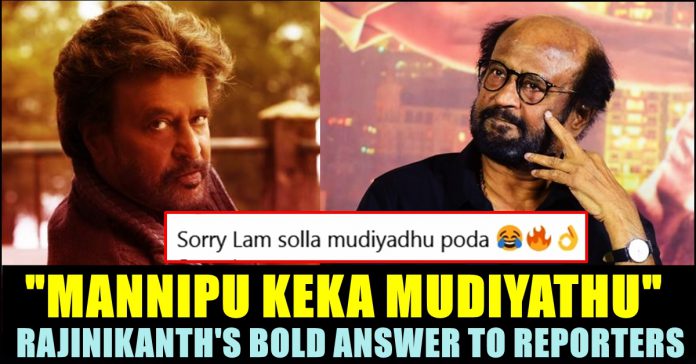 Superstar Rajinikanth found himself in big trouble after his speech in the 50th year celebration of “Thuglak” magazine. After his remark on E.Ve.Ra Periyar during his speech in the event, protest against the actor emerged from dmk party. A police complaint has been filed against Rajinikanth by a political group as well.

At the 50th anniversary event of “Thuglak” magazine, Rajinikanth said that Periyar conducted a protest in 1971, at Salem with naked images of lord Sri Ramachandramoorthy and Sita. “In 1971, Periyar took out a rally against superstition in Salem. In the rally, naked images of Lord Sri Ramachandramoorthy and Sita with sandalwood garland. The incident was covered by no news outlet at that time” said Superstar Rajinikanth who lauded Thuglak which was founded by Cho Ramaswamy for publishing the news in the cover image of their magazine. He said that Thuglak severely criticized Periyar’s rally.

Rajinikanth said that the DMK government led by Kalaignar seized the copies of the magazine and prevented people from reading it as it gained them a bad name among public. “The DMK government which was ruling the state at that time seized the magazine’s copy. But Cho reprinted it and sold it in ‘black’ The magazine which was sold for 10 rupees bought by people for 50,60 rupees at that time” he said in his speech.

Rajinikanth who is about to make his political entry, rejected the demand of DMK party who wants the actor to make an “apology”. “They are asking me to ask apology and to express my regret. I won’t ask apology for my speech and I register it here with politeness.” said Rajinikanth.

Dravidar Viduthalai Kazhagam has threatened protests outside the theatres in which Rajinikanth’s recent release “Darbar” is screening. Police complaints also registered against the actor by the political party.

Superstar Rajinikanth whose film career spans more than 40 long years, has earned the highest number of fans comparing to all the actors in India. Being debuted in Aboorva Ragangal, Rajinikanth managed to do 167 film so far and is still giving nightmare to his rivals. He is expected to contest in the election that is going to take place next year as a CM candidate.

What do you think on this answers from Rajinikanth to the reporters ?? Comment your views below !!