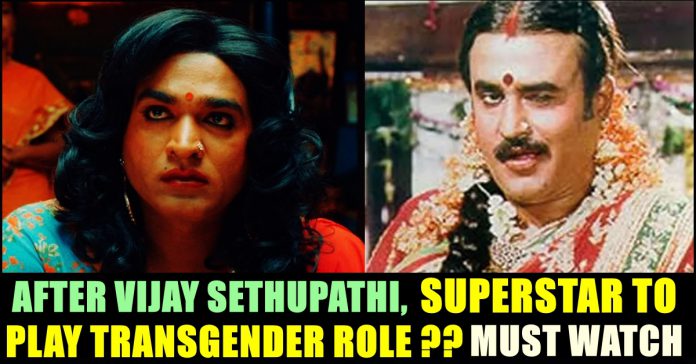 Superstar Rajinikanth’s “Darbar” is all set to release during Pongal holidays. The trailer shows Rajinikanth as a merciless cop who kills everyone in no time. Dialogues such as “Idhu Epdi Irukuu” from his classic movies were also took place in the trailer which elevates its standard with the presence of lead actress Nayanthara.

As a part of its promotional activity, the entire movie crew attended a press meet in Mumbai yesterday. The crew contained Superstar Rajinikanth, Director A.R Murugadoss, Anirudh Ravichander, Suniel Shetty and others. Superstar answered to many questions asked by the press reporters and to one of a question the actor revealed that he wants to act as a transgender.

Superstar Rajinikanth credited director A.R Murugadoss for convincing him to do a cop role after 20 long years. “I literally avoided cop roles as I don’t like such kind of serious cop and criminal chasings. But Adhithya Arunachalam is something different and Murugadoss extracted a fine acting from me” said the Rajinikanth.

When one of a reporter asked him what role he wish to do, the actor, after a brief thinking said that he wants to do a role of a transgender which surprised the crowd. When another reporter asked him whether any director approached him to do a role of a transgender in his 40 year long career, Rajinikanth said “Not yet. I just expressed my wish now. Murugadoss kind of should think about it.”

Further when one of a reporter from Indian express demanded him to give his opinion on the attack on the Students of Jamia Millia University, the aspiring politician refused to answer the question by saying that it is just a cinema funcion. “I will express my opinion in a different platforms. not here. This is a cinema function” said the “Moondr Mugam” actor.

It is notable that Vijay Sethupathi has experimented the role of a “transgender” in Super Deluxe and actor Akshay Kumar is attempting to do transgender role in the remake of Tamil film Kaanchana. As Rajinikanth is signing films consecutively, we can expect a filmmaker to have the courage to approach the Superstar to do a role of a transgender.

As soon as the trailer of “Darbar” released, it impressed many fans across the world and few celebrities couldn’t keep calm and let their emotion out by posting about it in their social media accounts. The film also features Prateik Babbar in a negative role and Rajinikanth is returning on screen as a cop after 25 years. Rajinikanth played the role of a cop in 1992 released Pandian. Darbar, slated for Pongal 2020 release, will the first of the most-anticipated films of the year. The background score and soundtrack will be composed by Anirudh Ravichander, while cinematography and editing will be handled by Santhosh Sivan and Sreekar Prasad, respectively.

Previous articleTop Director Not Convinced With Akshay Kumar’s Clarification !!
Next article“They Said It Infront Of Me” Bharath Gets Emotional On Stage !!

On the auspicious day of Vinayagar Chathurthi, Actor Suriya came up with a biggest announcement in Tamil cinema history. The actor who earlier released...

Former Indian cricketer Suresh Raina announced about his retirement from International cricket on the same day as Mahendra Singh Dhoni. Now, after the announcement...