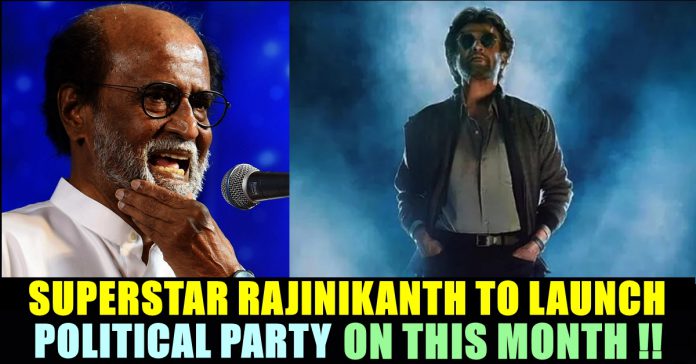 Karate Thiagarajan, dear friend of Rajinikanth has revealed that the Superstar actor will launch his political party during November month. He who went to the Kamarajar Statue located in Chennai Marina beach to pay his respect on the leader’s 118th birthday, met press reporters and updated the about Superstar Rajinikanth’s political party.

He reportedly said that DMK leader Stalin’s movement “Ondrinaivom Vaa” didn’t reach people but Rajinikanth’s “Summa Vida Koodathu” reached globalwide. “Every year, Congress party would pay respect to the great leader Kamarajar on his birthday. But this time, Congress’s state leader K.S Azhagiri failed to arrive. I heard that he is going to be expelled soon from the post and is going to be replaced by Karthik Chidambaram” he said in the press meet.

Thiagarajan also blamed MK Stalin for humiliating Navalar and launching his photo in Arivalayam. “He is asking for report to Chief minister for visiting foreign country. He himself visited bangkok recently, will he provide the report ?” Thiagarajan asked.

In his last political meeting which was took place on March 11, 2020, Rajinikanth said that he wants to change the political system of Tamilnadu. “There are more than 50,000 party positions in Tamilnadu. That kind of positions are needed during the election time. But after the election, a party doesn’t need that much employees. I have seen many politicians using their power to earn money in illegal ways. It will cause danger to the lives of people. After coming to the power, I wish to work with limited number people”

In that press meet, Rajinikanth said three important agenda of the party he is going to initiate. “December 31, 2017 is the first day I announced about my political entry. Whenever they asked about my political entry, I used to point out at God. So I believe people won’t say that I have been talking about entering politics for past 25 years” the actor said in his press meet.

After that Rajinikanth insisted on bringing youths to his party. “Youths won’t get power easily in politics. Only the sons of MP, MLA could get power. In my party, I intend to bring youths under 50 years of age as 60- 65% of my party members. The else 35% will be filled be sane peoples such as judges, lawyers, IPS, IAS and by the other party members with good reputation” he said.

Thirdly, the “Annaththe” actor said that he will not compete the upcoming election as CM candidate. He said that he will select an appropriate candidate to be as Chief minister and will lead his party as party leader alone. Rajinikanth displayed his political entry speech to reiterate his statement on not being a CM-aspirer. “It was not in my blood. I can’t think of being a Chief minister at all. You all know the incident that happened in 1996 where many influential people asked me to contest as CM. That is not in my mind at all. I will remain as party leader” he said.