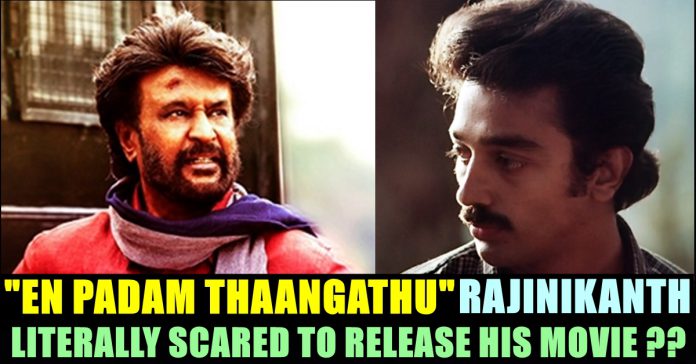 It is very well known to all of us that Ulaganaayan Kamal Haasan and Superstar Rajinikanth are the two pillars of Tamil cinema. Every aspiring actor who wants to be an actor in Tamil cinema must have been inspired either by Kamal Haasan or by Rajinikanth. Both them achieved many milestones in their respective career and fan base of both the actors is immense even today.

Being introduced by legendary filmmaker K Balachander, both of them identified as best friends since the day they started sharing screen space together. After appearing along with Kamal Haasan in few movies as a character artist, Rajinikanth started acting as solo hero in movies once Kamal Haasan advised him to take care of his own career. Now he has a fan base which no other hero in the world could imagine.

Now an interesting fact about the duo has been surfaced. Director and actor Chithra Lakhmanan, one of the senior person in Tamil film industry has revealed about how Rajinikanth felt after watching Kamal Haasan’s Nayagan. Chithra Lakshman says that Rajinikanth felt that his film “Manidhan” which was released during “Nayagan” won’t make it as the Manirathnam’s directorial looked exceptionally well.

On their political career front, both the actors are all set to compete in the assembly election of 2021. They even promised to join hands in politics if it is required. Kamal Haasan is currently busy in working for the sequel of his blockbuster film Indian whereas Rajinikanth completed shooting for “Darbar” and signed his next film with “Siruthai” Siva. Rumours are also doing rounds that they are going to join in a project together under Kamal Haasan’s Rajkamal production house. The film is going to be directed by Lokesh Kanagaraj according to sources.

It is notable that, In the 60 years celebration of Kamal Haasan, both the actors requested their fans not to fight with each other as love is the only thing that will last forever.