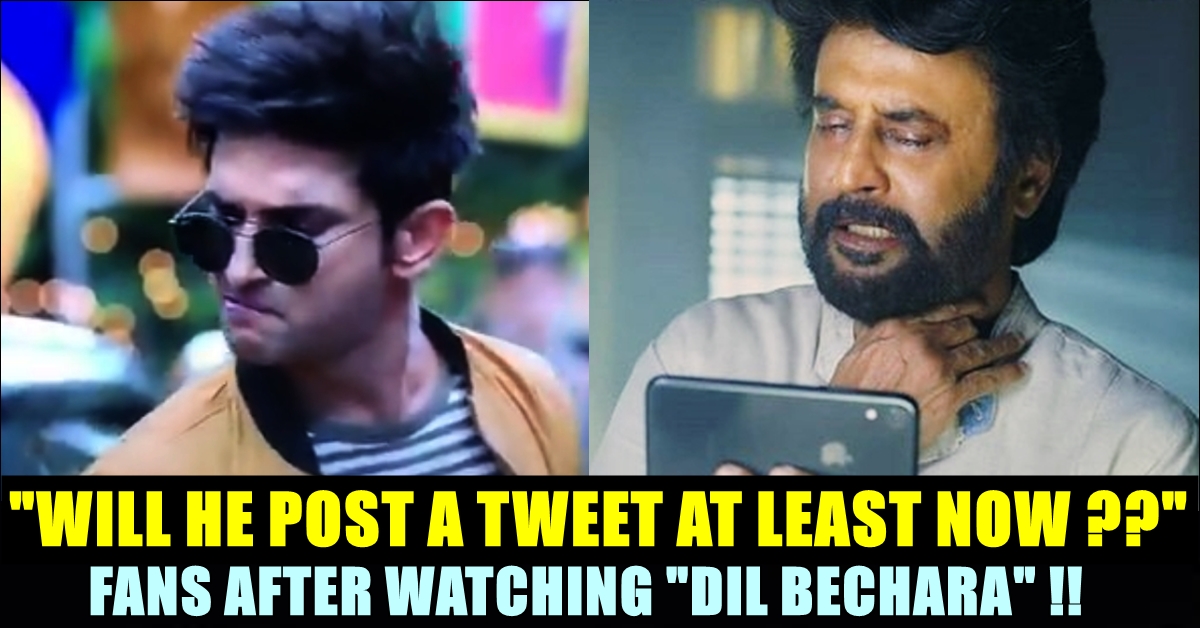 The long awaited “Dil Bechara” of Sushant Singh Rajput released on Disney Hotstar on 24th of July for free. Since his demise of the youngster, fans and followers of him expected the film to get released in big screens once the COVID 19 pandemic is over. However, due to various reasons of the production house, the film got released in the online streaming platform.

Now, the remake of Hollywood’s Fault in our stars, impressed the fans of India in big time as they gave 10/10 IMDB rating for the film which is first time in movie history. The emotional love tale is being dubbed as a fitting tribute to the 34 year old star who ended his life on June 14 2020. Along with the fans, many cinema celebrities are praising the film for it content and for the performance of the lead actor.

The film’s plot revolves around the romantic relationship between tow cancer patients who fall in love over their admiration towards Rajinikanth’s films. Portraying the struggles faced by young cancer patients, the film focuses on the bonding both the leads have between each other. The film is being celebrated for various reasons among the audience and one of the main reasons is the reference of Tamil actor Rajinikanth.

Sushant who plays as an ardent fan of Superstar Rajinikanth, imitates him number of times in the film. The fans of actor Rajinikanth who are large in number across the country, started expressing their love towards the scenes that involves their Superstar. Many posts with adorable captions along with the screenshots and videos from the film which contains Rajinikanth’s reference are surfacing in the micro blogging social media site.

Friends v must show our love towards #SushantSinghRajput .
He just showered his love for Thalaivaa Superstar @rajinikanth .
A Thanks giving is a must .

Meanwhile few fans are expecting a single tweet from Superstar Rajinikant at least now who failed to post a condolence message during his death. “Lastly, I hope to see a tweet from Rajinikanth for Sushant Singh Rajput, since he is shown as a huge fan of Thalaiva in Dil Bechara” wrote Samina Sheikh, editor of Bombay times in a tweet.

Lastly, I hope to see a tweet from @rajinikanth for Sushant Singh Rajput, since he is shown as a huge fan of Thalaiva in #DilBechara ❤️ pic.twitter.com/Y0Ppsg60Dm

A fan demanded Rajinikant to visit Sushanth singh Rajput’s house to pay his condolence after the end of the Corona crisis ends.

Killed the emerging young actor who had vision and spark in him which made many people uneasy.
He never looked like a normal.sctor to me. He always looked very unusual mysterious young man
Just like rajini sir has a mysterious personality. For millions.#Rajinikanth

Another fan worried on the fact that Rajinikanth didn’t post any condolence message for the demise of the actor.

He admire Rajini sir but for his demise no condolence message from #Rajini Sir 😔😔😔 #Sushant didn't die he lives through his movies, through our love/affection on Him#DilBechara ❤️