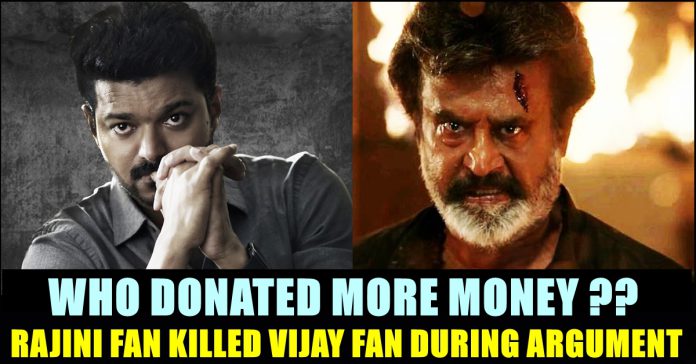 What started as a fun talk, ended up in murder and shook the entire state. We have seen fights between actors fans in social media and in public places such as theatres but never expected them to end up in a murder. A 22 year old fan of actor Vijay got killed by his own friend who is an ardent fan of actor Rajinikanth. The incident took place in Marakkanam on Thursday.

Rajinikanth has donated Rs.50 lakhs for corona relief fund and has been contributing in various other ways. Actor Vijay recently announced that he will be donating Rs.1.30 crores to the states of South India and for Central government and FEFSI union. While trying to prove that their favourite actor has contributed more, a murder has been committed. Police have made an arrest regarding the murder. Named as A.Dinesh Babu, the accused was a fan of actor Rajinikanth, says reports. According to police officers, the murder victim M.Yuvraj and his friend Dinesh Babu were under the influence of alcohol when the argument took place. They both argued over which actor had donated more money for the COVID 19 relief fund in the state. Rajinikanth At one point of the argument, both of them allegedly tried to prove that their favourite actor had paid more for the COVID 19 relief fund.

The argument reportedly got so heated that Dinesh babu pushed Yuvraj so hard that he sustained a head injury and died on spot. As soon as the incident took place, police arrived at the spot and arrested Dinesh Babu. The body was sent to private medical college and hospital in Kalapet in Puducherry.

This incident has created huge outrage among the Kollywood audience. Recently Vijay and Ajith fans involved in a ugly fight in the micro blogging social media sites by trending hashtags against each other. They expressed their wish of actors dying on their birthdays through their hashtags which made the general users of Twitter upset. “June 21 Black Day For Vijay”, “May 1 Ajith ku Paadai Kattu” were the hashtags that got trended in Twitter.

“Even while the entire country is burning, these people has nothing better to do in their lives?” asked many users of Twitter including actress Kasthuri on seeing their ugly behaviour in Twitter.

Further investigation regarding the death of Yuvraj is on, according to The Hindu.

Trailer of "Ruthra Thaandavam", directed by Mohan G of "Draupathy" fame released on You tube on Tuesday and receiving reviews from all over the...

Actor Shiva gained the tag "Agila Ulaga Superstar" in his very first film as solo hero. Known for his humorous behaviour, all the movies...

Meera Mithun is keeping the followers of her social media accounts busy by uploading videos and posting controversial tweets. If you are aware of...